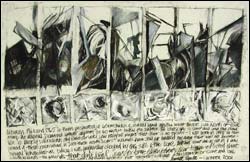 Jeannette Unite's exhibition at the Irma Stern Museum, titled Earthscars: a visual mining exploration, can be viewed until March 6, 2004.

Her most recent work deals with the 40-year-old diamond prospecting pits that are still evident as "earthscars" on the South African west coast. These were the point of departure for the artist. Diamondiferous materials and heavy minerals such as titanium dioxide and manganese are mined from the same beach deposits as the diamond gravels.

Over hundreds of millions of years the change in ocean levels has left a series of former surf beaches stranded up to 100m above the present sea level. These palaeo-beaches form the basis of the existing diamond projects along the west coast, she said.

The Overburden series refers to massive sand deposits above diamond gravel deposits that are moved during mining activities. Select sand samples from specific resonant sites throughout the country have been used in these pieces.

The diamondiferous hot fused glass is a new departure for the artist. The panels incorporate particles of kimberlite, coloured by earth pigments, to create pieces that refer to the rich geology and minerals that are integral to the economy and the colonial history of South Africa. Her method of art production, in which the earth's minerals become the artist's materials, creates an alchemy that reinforces the mining theme expressively.

Unite's mining sculpture proposal, incorporating glass and machinery, has been short-listed for the Constitutional Hill Court site in Braamfontein, Johannesburg.

She has exhibited in London and Scandinavia and has work in several collections, both private and corporate, on four continents, with patrons that include SwissRe, Vodacom, Old Mutual and Clifford Chance (a large international law firm). In a process of mapping areas affected by mining and migrant labour, the exhibition will be shown next at the Mozambique National Gallery in Maputo in March and April, 2004.