Students put on showcase at Michaelis 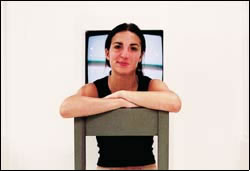 The 2003 Michaelis School of Fine Art graduate exhibition is an aesthetic and sensorial adventure.

Scattered around the Hiddingh Hall campus on Orange Street in Cape Town, the works by 45 graduating fourth-year and master's students are offering art buffs, critics and dilettantes plenty to chew on. For the show, which was opened by Dean of the Faculty of Humanities Professor Robin Cohen last week, the students produced cinematic re-inventions of Hollywood masculinity, multi-media parodies of the hallowed IQ test and elegiac takes on sexual abuse and fashion, among many other things.

The exhibition features pieces by graduates from all the disciplines in the School of Fine Art.

This year, in a break with tradition, the students themselves curated the exhibition. This was to expose them to the demands of curation, a tricky task that is fast becoming a more influential one in South African art circles, noted Professor Gavin Younge, who supervised the process.

And UCT students are definitely making their mark as artists, added Younge. "I think Cape Town measures up very favourably to the work which is being produced at a graduate level around the country," he observed.

The graduate exhibition runs until December 23, and is open Mondays to Fridays from 10h00 to 16h00.