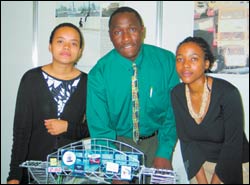 Be on the look-out for steel pedestrian bridges with arched handrails and the re-routing of 35 000 cyclists around an intersection in Sea Point at next year's Pick 'n Pay Cape Argus Cycle Tour, for this is the work of six UCT civil engineering students.

Approached by tour organiser Ken Sturgeon, the third-year students, working in teams of three or four, were asked to submit design ideas for pedestrian bridges and solutions for the problematic intersection as part of a competition.

"Ken was wanting to involve the students and, considering the time table, the only possibility was to run a competition as part of their curriculum," explained civil engineering senior lecturer Marianne Vanderschuren. "It also provided the perfect opportunity for the students to be involved in a real client situation."

Beavan Sikanda, Sannah Pooe and Sheila De Carvalho made up the team who were top in the bridge design category, while Brendon Bates, Chris Calvert and Nathan Kashweka were the team whose solutions to the intersection problem made them winners. Both teams were awarded a cash prize of R5 000. 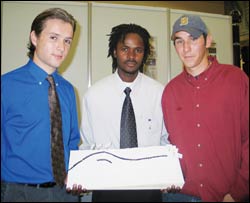 With construction on Chapman's Peak completed, next year the cycle tour will make its way through Sea Point to end on the Western Boulevard on the Sea Point side of the Green Point traffic circle.

According to Vanderschuren, this route runs through Beach and Victoria Roads and thus creates the need to provide access for pedestrians across Beach Road to the beachfront, where it is predicted that many people will gather to cheer on the cyclists.

Sikanda, Pooe and De Carvalho's recommendations include the design of three temporary bridges which are safe, stable, environmentally friendly and have aesthetic appeal, while being affordable.

The Chapman's Peak route will also see the cyclists having to travel through an intersection at Victoria and Queen's Road in Sea Point. At this section of the race, cyclists are travelling eastbound down Victoria Road and must make a sharp turn left into Queen's Road.

Vanderschuren said: "The problem that arises is that Queen's Road is a narrow road divided by three traffic islands. The task given to the students was how to allow for 35 000 riders to pass through a section of roadway no less than six metres wide.

"Using engineering knowledge, they had to provide a safe, efficient and economically viable solution to best suit the needs of the cyclists and the management committee."

After careful evaluations and analysis, the team recommended that re-routing traffic around the intersection would be the most reasonable solution, rather than the removal of the traffic islands and the construction of ramps.

"The management committee was impressed that the students had recommended such a flexible and practical yet simple solution," said Vanderschuren.