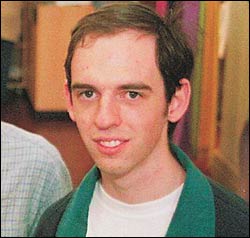 The excitement of graduation mounts for one student this week, when he receives two degrees from the science faculty after just three years of study.

How did he do it? Well, while still at school Merry unofficially took maths I and computer science I, making it possible to finish his BSc in two years. A university regulation, however, prevented him from being awarded his degree after only two years of study.

Merry continued with his honors in his third year at UCT, making him the recipient of two degrees at this year's graduation ceremonies.

Continuing with his master's next year, Merry will be doing research into computer graphics.

"I have been interested in computers and programming since I was about six years old," he said.

Helping with the training of the South African Computer Olympiad high school squad, Merry was deputy leader of the team of four, who in September went to the International Olympiad in Informatics in Wisconsin.

Last March, he was part of the team that won the South African regional event, which earned them a place at the World Finals of the ACM ICPC (Association of Computing Machinery - International Collegiate Programming Contest) in Los Angeles. They were placed joint 13th, and won the African/Middle East region. The same team will be travelling to Prague next year having won the South African regional competition again in October.