Tiny midge used to control the spread of rooikrans 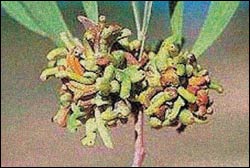 Midge control: The gall, which could overtake conventional methods of controlling Rooikrans, such as the hacked bush above.

The latest addition to the armoury in controlling invasive alien plants in the Western Cape is a tiny midge, about half the size of a mosquito, which is being used to control the spread of rooikrans. Released less than 18 months ago, the gall midge, Dasineura dielsi ,has already been found doing its bit more than 500km from the release site near Stellenbosch.

The cycle starts when the midge lays its eggs in the flower buds of the rooikrans. Once these eggs hatch, the larvae tunnel into the florets and secrete a substance that deforms the developing seed pods into a gall.

Inside the gall are several chambers in which the larvae develop until they are ready to emerge as flies, a season later, thereby completing the cycle. In the process, the midges effectively reduce the seeding capacity of the plants without killing them or stunting their growth.

The rooikrans project was the subject of a PhD study by Australian student Robin Adair who came to South Africa from the Keith Turnbull Research Institute in Melbourne. Working under contract with the Plant Protection Research Institute (a division of the Agricultural Research Council), he registered for his PhD with UCT while preparing the way for the release of the midge.

His research focused on establishing that it was safe to release the midge into the environment without there being any risk of it spreading to other plant species. Once this had been ascertained, the midges were ready to begin their work in the wild.

Although Adair has since returned to Australia, the baton has been picked up by colleagues at the Plant Protection Research Institute in Stellenbosch and by UCT's Biological Control of Weeds Unit. Together they will undertake post-release evaluation studies to monitor how effective the midge is in reducing seed set and seedling recruitment by rooikrans.

Early signs are promising. Galls have been found as far as Calvinia to the west, and George in the east. "I wouldn't be surprised if it is not in the Eastern Cape already," says research scientist Professor John Hoffmann.

Hoffmann says that one of the aims of biological control is to stop the uncontrolled spread of invasive alien plants without necessarily reducing their abundance because they may have considerable local economic value.

In the case of rooikrans, the value is in firewood. In another project a seed beetle is being distributed to control black wattle following negotiations with foresters in KwaZulu-Natal where there is a multi-million rand export industry where the wattle is grown principally for pulp and tannin production.

This project commenced once it was shown that biological control does not affect growth of the plants and that insecticides can be used to control the beetles in seed orchards.UCT is currently involved in several weed control projects, including looking at the use of gall wasps and seed beetles to control acacia species and mesquite, which infests arid areas.

Work is also being done on the potential to use a cone-feeding insect to control the spread of pine trees. Another long-term project is measuring the effectiveness of the insects being used with great success to control an invasive prickly pear in Kruger National Park.

According to Hoffmann, South Africa is the third most active user of biological control - after the USA and Australia - with a history that goes back to 1913, when the first insect was introduced to control a cactus. Now there are some 90 different agents - ranging from insects to fungi - controlling 50 types of weeds.

Hoffmann ascribes South Africa's success in this field to the co-operation that exists between various players, from the agricultural industry to academia. Forging these co-operative links definitely appears to be doing the trick.

"In most cases, the first prize is to reduce a weed to a level where it is no longer a problem. We reckon that about a quarter of the projects in South Africa have achieved that," said Hoffmann.