Staff side in surprise win 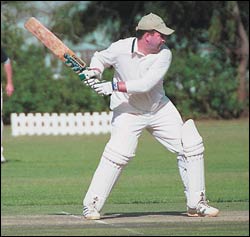 The UCT staff side bemused themselves, their opponents and the three spectators in the UCT Oval stands when they convincingly beat Medics (a coterie of well-heeled medicos taking time off from golf) by six wickets on Sunday, November 2.

The match - the traditional season-opener for UCT - has been something of a one-sided affair over the years, with the staffers and students usually at the wrong end of a cricketing thrashing. And for a while there last Sunday, the match seemed set for a carbon copy finish

Medics batted first, and although UCT contained their rivals for much of the innings, some indifferent bowling towards the end saw Medics reach 203 for 6 off their allotted 35 overs.

The UCT staffers were upbeat, but beer cans - some full - were soon flung aside (offenders were stiffly reprimanded by aghast seniors who saw no reason for such waste) in frustration when the side lost both its openers for only five runs (Craig Dobson bowled for nought, Professor Richard Whitaker dismissed similarly for four).

hen came the most inspiring batting performance - records may have fallen, and the archives are currently being trawled - in the team's recent history when Grant Elliott and Herbert Hindley put on 150-run partnership for the third wicket. Hindley was eventually out for 67, while Elliott went on to record an unbeaten 97 as UCT coasted to 206 for four (Associate Professor Dave Reid, who scored 12, was the only other UCT wicket to fall) off only 29 overs.

Fans - once he woke up - and teammates were bowled over by both the victory and its singular ease. Elliott and Hindley have both since been fined for setting unattainably high standards for the rest of the season.