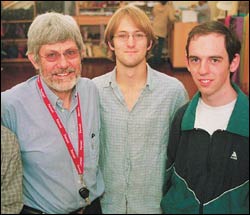 Two computer science students who were among the few to compete at the International Olympiad in Informatics (IOI), are giving back to the community by training younger students for the same competition.

Bruce Merry and Carl Hultquist, both honours students, were on the scientific committee, together with Graham Poulter, Harry Wiggins and Shen Tian, also ex-olympiad participants who set the questions for the Old Mutual/CSSA 2003 Computer Olympiad. The top four participants of this olympiad go on to enter the IOI.

Exclusively for high school and first-year students, the aim of the olympiad is to recognise and train students for the IOI.

Headed by Donald Cook, a student advisor at UCT, the committee implemented a new round in the competition in 2002. Known as the "first round", only a pen and paper is needed to participate, it is an initiative to raise money for disadvantaged schools so that they can be supplied with computers and teachers can be trained. The "first round" this year netted 11 000 participants from all over the country.

Cook said: "It is a strong outreach programme that attracts a lot of kids to the department."

The second round whittles the number to 2 400 participants, while only 15 participants remain in the third round. With two competition days consisting of five hours each, the competitors are required to solve three problems. The top six are awarded medals and go on to the training camps that are held at UCT. Four are then chosen to compete in the IOI.

Merry, who has been involved in these olympiads since grade seven, also maintains a website together with Hultquist, that is used for training purposes.

"It is a lot of fun to help others and watch them learn. It also keeps the brain in shape," said Hultquist.