Getting together for nothing but the truth 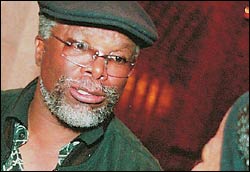 Telling it like it is: Playwright-actor John Kani speaks with guests after the opening performance of his new play, Nothing but the Truth.

The Vice-Chancellor, Professor Njabulo Ndebele, recently treated alumni from around the Western Cape to the opening performance of the new John Kani/Janice Honeyman production, Nothing but the Truth, currently on at the Baxter Theatre Centre.

Before the show, the graduates enjoyed a little get-together with the VC and their fellow-alumni, the soirÃ©e hosted by the Alumni Relations Office. And once the curtain went down on the opening night, guests got to chat and hang out with the actors and crew.

Aside from the many UCT patrons in the auditorium on the night, Nothing but the Truth has, of course, a handful of other university connections. Notably it is directed by Honeyman, who graduated from UCT in 1969, and stars Warona Seane, who completed her drama studies here in 1999.

Nothing but the Truth, which scooped the 2002 Fleur du Cap awards for best actor (playwright-actor Kani) and best new South African play, runs until November 1.