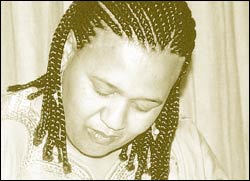 Elinor Sisulu, Zimbabwean feminist writer and biographer of Walter and Albertina Sisulu: In Our Lifetime, has been awarded the Noma Prize for the best African book for 2003.

The book's Cape Town launch was co-hosted with the African Gender Institute (AGI) and David Phillip Publishers at UCT's All Africa House in December 2002. Sisulu spent the best part of last year at the AGI completing the book.

"This unique book breaks with the conventions of 'Great Man-Alone' biographies, to give a detailed account of the Sisulus' lives, and the liberation movement which they so proudly shaped, even as it shaped them," observed Professor Amina Mama, UCT's Chair of Gender Studies.

The Noma Award was established in 1979 and is open to African writers and scholars whose work is published in Africa. The prize is awarded annually for an outstanding new book in the following three categories: (i) scholarly or academic, (ii) children's books, and (iii) literature and creative writing.