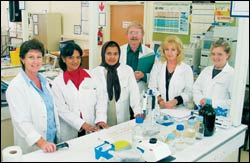 The Pharmacology Laboratory housed in the Department of Medicine has received a thumbs-up from the South African National Accreditation System (SANAS), assuring the facility international acceptance and global recognition of its drug testing results.

The endorsement is important news for university research groups involved in drug development as the medical laboratory is keen to extend these services to UCT researchers working in the field.

Among other things, the Pharmacology Laboratory provides a therapeutic drug monitoring service to Groote Schuur Hospital (GSH) as well as surrounding associated academic hospitals, such as the Victoria and Red Cross Children's Hospitals.

Norman, a UCT master's graduate in pharmacology, was enlisted to take charge of the pharmacology division's quality assurance portfolio, extending her service to the unit that began as a part-time assistant while she was an undergraduate student.

The facility has also developed considerable capacity in the development arena, to create tests for drugs that have not yet been routinely monitored. Presently, the laboratory is the only facility of its kind in Africa to offer assays for Sirolimus, a new immunosuppressant.

This required five "gruelling" months of writing standard operating procedures and training staff in quality standard manuals, policies and procedures. After two days of intensive interrogation and observation, the laboratory got the green light from officials and was recommended for accreditation.

She is particularly proud of the achievement, "no mean feat" for an academic-cum-state institution, she added. "With a team of ten, including only six staff from the Provincial Administration of the Western Cape (PAWC), we managed to pull off a remarkable triumph."

The new ethos required by the quality system resulted in a change in the team's mindset, Norman added. "We had to get used to the rigid system of documenting, dating and signing everything."

The HPLC system, which is being used to test the Sirolimus drug, is coupled to a mass spectrometer, a state-of-the-art machine that allows technicians to develop faster and more sensitive assays.

In future, the laboratory's academic research will centre on their LCMS expertise as well as new assays or analyses for therapeutic drugs. Norman said the laboratory was keen to offer these services to UCT researchers in drug development and plans are already afoot to purchase a new higher powered tandem mass spectrometer.

"We are already collaborating with various Medical Research Council (MRC) investigators locally and nationally, as well as with research groups from abroad," Norman continued.

The laboratory is currently collaborating with a pharmaceutical company in Pakistan to test their product for registration with the Global Drug Facility, an international organisation committed to increasing and ensuring access to high quality tuberculosis TB drugs.

Seven years ago, under the umbrella of its Pharmacokinetic Research Unit, the pharmacology division began performing clinical and laboratory work under contract to the South African MRC for pharmaceutical companies and the World Health Organisation (WHO), under the direction of UCT's Professor Peter Smith.

Clinical studies in patients with tuberculosis were initiated at DP Marais Hospital and the clinical research division was relocated back to GSH with its access to growing patient and healthy volunteer databases.

In 1998 the laboratory was awarded the status of being one of two WHO recommended centres in the world for testing the TB drug rifampicin. Last year the facility began its push for ISO 17025 accreditation. Good news is that the laboratory's work will soon move into the arena of anti-retrovirals.

"TB is an opportunistic infection, so coupled with the reduced immunity of HIV, the incidence of TB is high in these individuals," Norman elaborated. "With the high drug burden from anti-retrovirals and TB medication, researchers are concerned about the reaction between these drugs, which may inhibit or enhance an enzyme that might break down the drugs faster. We will be researching these effects."

The laboratory's services also include: