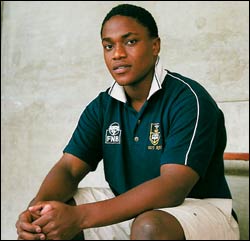 Tackling the issues: Herbert Mayosi, who currently plays for the under-20 A1 rugby side, has been elected as UCT's Rugby Club Captain for 2004.

Upgrading the spectator stands on UCT's rugby fields will be just one of the tasks Herbert Mayosi tackles next year.

Elected the 2004 UCT Rugby Club Captain, Mayosi will be responsible for acting as a link between the club and its players, dealing with players' grievances and seeing to various administrative and financial duties. The second-year student said he was "very surprised" when the unanimous decision was announced at the club's annual general meeting, but said that he was ready for the challenge.

"I believe that everything you do now will help you with your career in the future. I would like to carry on with law once I have finished my BA degree. The skills I acquire now will be put to good use when I'm practising."

Currently a prop for the under-20 A1 side, Mayosi wasn't always interested in rugby.

"My passion was soccer," he explained. "But when I was younger I was told I was too fat to play. I later went to Selborne College in East London and, being a rugby school, I thought I'd give it a try. I still watch soccer whenever I can but it's my rugby that I concentrate on now."

And concentrate he does. During rugby season the Wynberg Boys High old boy trains for two hours three times a week with his team in addition to putting in regular sessions at the gym.

"I'm hoping to play for the first team next year so I need to work hard."

Mayosi, who is the first black student to be elected club captain, takes over from the current captain, Neil Reimer, at the rugby club's end-of-year dinner, to be held later this month.

"My friends nominated me because they thought I would make a good captain - I don't intend to let them down," he concluded.