Health Sciences looks back on adoption of primary health care 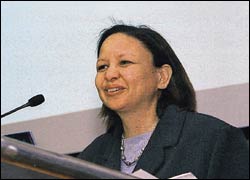 Speaking out: According to Assoc Prof Gonda Perez, UCT has made great progress in adopting a primary health care approach.

Twenty-five years after delegates at a major international congress pledged their support to the Alma-Ata Declaration on primary health care, governments and institutions are reflecting on how well they measure up to the document's (in hindsight) lofty ideals.

The Alma-Ata Declaration was adopted at the International Conference on Primary Health Care in Alma-Ata in the former Union of Soviet Socialist Republics (USSR) in September 1978. The Declaration touted primary health care as the key to bringing about "an acceptable level of health for all people of the world by the year 2000".

"Health for all" has since become the mantra of primary health care advocates around the world. Two weeks ago, UCT's Faculty of Health Sciences commemorated the declaration's 25th anniversary with a weeklong programme of seminars, poster presentations and exhibitions. The culminating event of the week was a conference that fielded speakers from the faculty (both staff and students), as well as guests from the University of Stellenbosch, the University of the Western Cape, and the province's Department of Health, among others.

"Primary health care as a vehicle to promote health for all was really formalised in Alma-Ata." Twenty-five years on, institutions and government are looking back to see how close they have come to realising Alma-Ata's call for health for all (albeit after the 2000 deadline), he said.

"There have been many successes, and many advances that have impacted on mortality and morbidity," he noted. "But it is sadly true that today huge disparities remain in health between groups defined by geography, by gender, by socio-economic status and other factors.

"We must freely admit that we still have a long way to go."

Musing on developments closer to home - specifically at UCT - Associate Professor Gonda Perez, deputy dean in the Faculty of Health Sciences, observed that the university had made a relatively belated response to the Alma-Ata Declaration. It was only in 1992 that the then vice-chancellor, Dr Stuart Saunders, raised concerns about "the lack of coordination in the faculty's teaching of primary health care".

"There had been pockets of teaching in areas like community health, paediatrics and in the allied health sciences, but there was no real faculty position or strategy," said Perez.

Since then, there have been a number of innovations in the faculty, which ultimately led to the transformation of the curriculum, reported Perez. More resources have also been allocated to the primary health care directorate, including the creation of new posts.

Early this year, Volmink stepped in as the new chair of primary health care, succeeding Baqwa, who died in 2001.

"We need to strengthen the gains that we have made," said Perez, "because we still have to convince the pockets of resistance that remain in the faculty of the value of the primary health care approach."