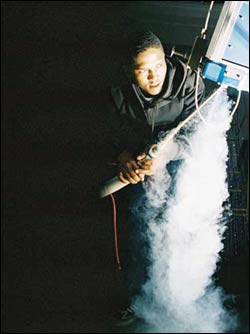 Close-up: NASSP honours student Thapelo Tshenye at work during a recent fieldtrip to Sutherland. He has been interested in astronomy since boyhood. "I love the African skies," he said.

A telescopic search of the southern skies one frigid July night during a fieldtrip to Sutherland revealed a special secret to stargazer Denise Dale.

Dale, an honours student on the new, collaborative National Astrophysics and Space Science Programme (NASSP) hosted at UCT, identified two binary stars in which the central star pulsates. As these binary stars interact with each other, mass flows from the low mass companion to the more massive central star, known as a white dwarf.

Only two other mass-transferring binary stars have been discovered, one of which was recently found by Dale's UCT supervisors, astronomers Distinguished Professor Brian Warner and Dr Patrick Woudt.

New discoveries such as these are being made possible by such initiatives as the Sloan Digital Sky Survey in the United States, which has resulted in the sighting of 40 new interacting binary stars (sometimes called cataclysmic variable stars). From these, Warner and Woudt selected two as possible candidates in which the central star pulsates. These were the two that Dale studied in Sutherland.

"Both turned out to be pulsating, doubling the number of known pulsating cataclysmic variable stars," she added.

A white dwarf, she explained, is an evolved star and when such a star reaches a specific temperature range (12 000 deg Kelvin) it will pulsate. "With the pulsations one can, in principle, study the density structure of the star."

The timing of the discovery meant Warner could announce it at a conference on variable stars in Christchurch, as well as at the general assembly of the International Astronomical Union in Sydney a week later.

The find is significant in astronomical circles. "Pulsating stars are observed quite commonly in isolated white dwarfs and the pulsation period can be used to study the density structure of the star (astroseismology) but they are very rare in mass-transferring binaries," Dale explained.

"Having doubled the sample from two to four, we can now possibly study what effect mass accretion will have on the central star."

These new celestial objects are being found through dedicated surveys of big areas in the sky, using big telescopes. But as the sightings are quite faint, these are followed up using bigger telescopes such as the Southern African Large Telescope (SALT) at Sutherland.

This "giant eye" facility, the largest single optical telescope in the southern hemisphere, will be ready for action by the time Dale reaches PhD level in 2005.

Dale was one of 13 students who travelled to Sutherland and then on to the HartRAO and Boyden observatories during the two-week fieldtrip.

The students enjoyed a practical introduction to optical/infrared observational techniques. And despite bad weather, they were able to take part in observations made with 0.5m, 0.75m, 1m and 1.9m telescopes. Ugandan honours student Edward Jurua measured an sdB star over several nights using the 1.9m telescope. Once he graduates, Jurua plans to put his energies into space science programmes in southern African and particularly the development of the field in his home country.

Another honours student, Thapelo Tshenye, has been interested in astronomy since boyhood. A graduate of the University of North West in Mmabatho (he hails from Rustenburg), Tshenye says he loves the African skies.

"The Sutherland trip was the best, perhaps because I am passionate about optical astronomy."

"The quality of their practical work was very high," Dunsby noted, adding that many of the honours projects would be good enough to publish at the end of the year.

In its first year, the NASSP course has been very successful and is expanding fast. "This year's intake of 13 honours and five master's students is likely to be topped next year when as many as 30 students are expected, with an additional three MSc students still on the programme," Dunsby added.

Good news for the programme is the recent allocation of R440 000 for a new teaching computer laboratory next year, an important facility.

(The NASSP course is a collaboration between 13 institutions, including the Universities of Free State, Natal, Zululand and Rhodes, as well as the South African Astronomical Observatory (SAAO), the Hartebeespoort Radio Observatory and the iThembaLab.)