Lone oboist off to perform in UK 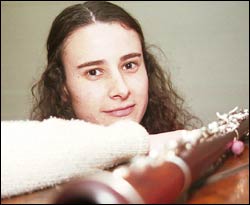 Musical movement: Oboist Hilary Paterson has won the ROSL/South African Scholarship that will take her on a study and performance trip to the UK next year.

But the 21-year old hopes to make up for this want of company when she tours the United Kingdom on a two-week scholarship at the end of 2004. Paterson, a final-year BMus (orchestra) student, was recently named the winner of the prestigious Royal Over-Seas League (ROSL)/South Africa Music Scholarship, which will take her on a four-week study and performance visit to the UK in either 2004 or 2005 (she's decided on late-2004).

In addition to attending classes for a week at the Dartington International Summer School (billed as a "world famous meeting ground for musicians and artists") in England, she will also take lessons and perform in Edinburgh and London.

Paterson was one of six UCT candidates up for the scholarship, awarded by the ROSL, a Commonwealth organisation that seeks to encourage friendship and understanding between people from different countries. She recently got the nod from the ROSL panel, comprised of violinist Nona Liddell MBE, a professor at the Royal Academy of Music and Trinity College of Music, London; pianist Philip Fowke, former head of keyboard at Trinity College of Music, London; and Roderick Lakin, director of arts for the ROSL.

Paterson takes a wealth of local experience with her to the UK. In addition to performing as principal oboe with the UCT Symphony Orchestra and the UCT Wind Symphony, she also joins up regularly with the Cape Philharmonic Orchestra (to earn some spare cash).

And she made her "stage debut" at the recent Klein Karoo National Kunstefees, where she formed part of a small ensemble that added mood to the Martinus Basson / Pieter Fourie play Koggelmander-man.

Notwithstanding her own many accomplishments, Paterson hopes to pick up plenty of pointers from peers and supervisors in the UK. "I'm looking forward to hearing other oboists and getting input from other teachers and having lots of competition," she said.

"I don't really get any opportunity to test myself against other people, so that's going to be an interesting experience."