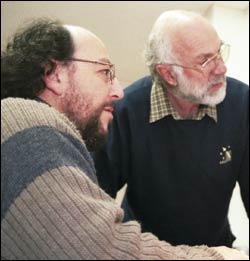 Going up: The Avian Demography Unit's Prof Les Underhill (right) and RenÃ© Navarro check the hit tally on the Unit's popular and informative website, one of the earliest departmental websites at UCT.

The Avian Demography Unit (ADU) celebrated a cyberspace milestone when the 50 000th "hit" was recently recorded on its popular website.

Speaking at a small, informal gathering to mark the achievement, ADU director Professor Les Underhill congratulated the unit's staff, urging them to keep their material up-to-date and interesting. (The 50 000 hits do not include those from within the university.)

According to the ADU's IT consultant and webmaster, RenÃ© Navarro, one of the reasons the site is so popular is simply because "birds are popular".

"We've made an effort to make lots of information available to the general public, using accessible language. None of the content is too scientific, although the site is home to some technical papers," the Chilean doctoral researcher explained.

"And we have some nice pictures," he added.

Navarro began the site in the early 1990s, when few departments boasted such advanced communications.

At the time of going to press, the Unit had notched up a grand total of 50 199 hits.n