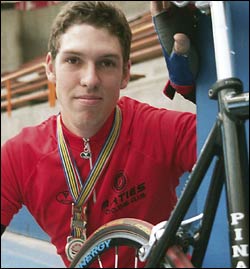 King of the mountains: UCT's Neil Timm who was placed fifth at the SASSU Annual National Cycling Championships.

Timm was also presented with the King of the Mountains jersey at the beginning of the third stage of the event, successfully holding onto the title for the rest of the race.

Besides receiving a medal for his efforts, Timm's prize includes being selected as a member of a South African universities team, which is scheduled to take part in a Garden Route race later this year.

According to Timm, the weather for the five-stage, three-day race was favourable, with rainy and cold conditions making way for sunny weather at the end of the second day.

The speed and social nature of the sport are what attracted the 20-year old to cycling, who admitted to training for only three weeks before the race.

"The race came at a bad time," he said. "It was at the end of the season and I only managed a minimal amount of training."

The lack of training notwithstanding, Timm's recipe for success includes getting enough sleep and increasing his carbohydrate intake to ensure sufficient stamina prior to a race.

"It's also important to remain well-hydrated, so I tend to consume a lot of energy drinks before and during the race," he added.

For now it is, however, back to the books as Timm's cycling career is placed on the back-burner and he concentrates on his studies.