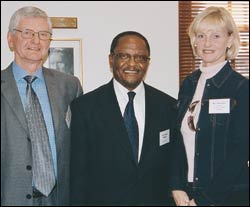 The Harry Crossley Foundation has been one of UCT's most generous supporters of postgraduate research for over 30 years.

It was founded after Harry Crossley's death in 1968.

Crossley was born in Yorkshire in 1884 and left school to work in a textile factory at the age of 11. He attended night school and was later employed as a shorthand clerk in a soap works in Lancashire, where he was offered an opportunity to learn languages at Halifax Technical College. He reached teacher's level in French, German and Spanish.

After a stint as a representative for an engineering company in Paris, Crossley taught at a school of languages in Spain. When he returned to England, he bought a gas engineering company. After the Second World War he came to South Africa where he lived until his death.

He was married to Edith Doris Crossley. It was his wish that the money he left should be used to provide funding for postgraduate students and for medical research at UCT and at the University of Stellenbosch (US).

The Doris Crossley Foundation is a separate entity that also provides funding for students at UCT and US.