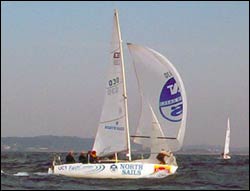 Plain sailing: The UCT team had the wind at its back at this year's Lipton Cup.

UCT's Yacht Club by all accounts - they did after all win the youth trophy - did very well at the recent Lipton Cup Challenge in Durban, but skipper Jamie Waters concedes that big day nerves may have straitjacketed his young development team's sailing smarts.

Waters - he's over the irony - and his five crewmates (Lucy Norton, Brandon Smith, Amy Nel, Phillip Rist and Neil Hart) returned from two gruelling weeks at Durban's Point Yacht Club recently. In quick succession, the team had sailed the University's boat, North Sails, in the NCS Regatta, which incorporates the national L26 keelboat class championships, from June 29 to July 4, before taking to the waters for the Lipton Cup Challenge, the country's premier offshore sailing event, from July 6 to 11.

And the team did rather well - a gratifying seventh place in the NCS event, and a respectable fifteenth (out of 32 boats) at the historic 50th Lipton challenge. The students also won the Owen Aisher Trophy as the best-placed youth team at the Lipton Cup.

But while all the UCT sailors had each clocked up plenty of sailing time - their rÃ©sumÃ©s catalogue everything from provincial championships to Cape to Rio outings - they are still very young and inexperienced - the oldest new member was 21. Two were on their maiden Liptons, while two others were on their second runs, noted Waters.

In contrast, other teams, especially those who brought out their best sailors for Lipton, boasted some seasoned campaigners.

The students also had to brace the Lipton hype and barroom mind games. "It was very overwhelming for some of the team," said Waters.

"It was much bigger and larger-than-life than what we'd expected."

In the end - for a short while anyway - the Lipton brouhaha stifled the team's performance on the water. "It seemed as if the whole level of competition got pushed up at Lipton," noted Waters.

"And it was incredibly difficult for the team. You finish off one race, and a few days later you're sailing Lipton and everyone's nervous - it's the same water, the same harbour, the same team, but for some reason the boat is tense and quiet."

At the end though, the team's class showed. "We expected to do better than fifteenth, because we came seventh at nationals. But in hindsight, it was an extremely competitive field.

"So I was very happy with how the team performed."

And the team's young blood will act as core for the UCT club's future Lipton campaigns. "Traditionally we've sailed very experienced teams, but we realised that we needed to start somewhere with getting some new talent into the group," said Waters.

With this young crew geared to inspire future UCT sailors, maybe, just maybe, that Owen Asher trophy will someday soon make way for the big one.