Rubble and tumble as excavator goes through the concrete floor 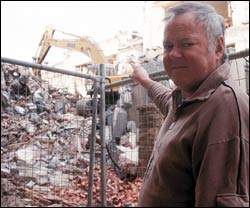 Rising from the dust: "JC" Thornthwaite shows the 30-ton excavator and its driver that fell through the first floor of the building it was demolishing at medical school.

Chemical pathology senior technical officer "JC" Thornthwaite remembers a loud noise and the surrounding Falmouth and Wernher and Beit buildings shaking when a 30-ton Bell 1430 excavator toppled sideways after the first floor of the building it was demolishing collapsed last Tuesday afternoon.

The machine, which carries a heavy hydraulic jackhammer up front, fell about 1.5m. The driver was unhurt and emerged from the cab looking "surprised", said Bradis Demolition and Earthmovers site manager, Anthony King.

A front end loader was brought in to pack rubble under the stricken excavator, which then righted itself. A mere two hours later it was back on the job, with its driver, who had smoked a cigarette in the interim.

According to King, the first floor section that collapsed was weaker than expected. The excavations are part of the construction of the new Institute of Infectious Disease and Molecular Medicine (IIDMM).