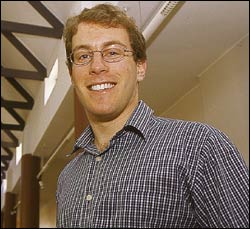 Explorer: Honours and Master's theses have failed to exhaust the wealth of research material Adam Mendelsohn has unearthed on the link between Jewish communities in South Africa and the American south.

Adam Mendelsohn has much to celebrate - not only did he please his father, Associate Professor Richard Mendelsohn of the Department of Historical Studies, with some stellar work on his Master's thesis, but the topic of his paper has also impressed Brandeis University in the United States into offering him a five-year doctoral fellowship to continue his work.

Mendelsohn fils this week graduates with distinction for his Master's thesis, supervised by Professors Milton Shain (Hebrew and Jewish Studies) and Howard Phillips (Historical Studies). In his 200-page project, he attempted - very successfully, if his marks are anything to go by - to draw comparisons between the responses of the Jewish communities in South Africa and the US south to the emerging anti-apartheid and civil rights movements, respectively, of the 1950s and 1960s.

But, said Mendelsohn, he has only begun to scratch the surface of the topic. Inspired by a course on the black and Jewish experience in the US that he took on exchange at the University of Wisconsin at the start of his UCT honours studies, Mendelsohn returned to South Africa with the possibility of a SA/US juxtaposition in his sights. There were already such overt collations - both were very similar-sized communities facing very similar problems at much the same time.

"One of the reasons I finally decided on this approach was because it hadn't been done before, and it seemed such an obvious comparison," Mendelsohn commented. "It was just crying out to be written."

For his Master's research, Mendelsohn chose to eschew the big-name (South African) Jewish activists of the time - Helen Suzman, Albie Sachs, Joe Slovo and the like - and chose instead to focus on the broader, middle-ground communities. Here, he was sure, were more interesting patterns to scrutinise.

To find his material, though, he had to do plenty of travelling. In the US, he trawled scripts at the American Jewish Archives in Cincinnati and the Tulane Special Collections in New Orleans, while back home he pored over texts in the archives of the South African Jewish Board of Deputies (SAJBD) in Johannesburg.

And he found plenty to write about. For one, he found opposition to the rise to power of the National Party in South Africa coincided closely with the nascent civil rights movement of the US south.

"Also, South African Jews were obviously very concerned about the Nationalists and their anti-Semitic track records. In the US the segregation issue had become intertwined - at least at its margins - with anti-Semitism, as a lot of the radical segregationists were blatantly anti-Semitic," explained Mendelsohn.

Both communities responded to these situations - and the respective opposition movements - with fear and uncertainty, he added. There was concern that, once done with the blacks in the two regions, the National Party and American segregationists would turn their attentions to their small Jewish communities.

When looking at representative community bodies, Mendelsohn observed tension both in the relations of the SAJBD with international Jewish organisations rallying against apartheid, and between groups like the B'nai B'rith in the American south with vocal Jewish anti-segregationist associations in the north of America. The tension was partly brought on by concerns of attracting unwanted attention onto the Jewish communities directly in the line of fire, observed Mendelsohn.

To explore these links further, Mendelsohn also looked at the relationship between Jewish communities and their appointed rabbis who, mostly without their congregations' sanction, would speak up against (in South Africa) apartheid and, in the US, against segregation. By chance, Mendelsohn found a previously unknown - and very direct - connection between two rabbis.

The first was Hungarian Holocaust survivor, Rabbi AndrÃ© Ungar, who came to South Africa to serve a Jewish community in Port Elizabeth. Although well liked by his congregation, Ungar's political convictions made them wary and nervous.

Their ties were severed, however, when the South African government refused to renew Ungar's visa, and he set off for England and, later, the US. His path would eventually cross with that of another Holocaust survivor, Rabbi David Ben-Ami of Hattiesburg in Mississippi.

Ben-Ami had succeeded a strident anti-segregationist in Hattiesburg, and he - like his predecessor and Ungar - would make his community apprehensive about his evolving political activities. He would also later be asked to leave the congregation after becoming involved with a civil rights group from the American north that had been sent to Mississippi to raise some attention - and objection - to local policies.

Ungar just so happened to be one of the members of that northern delegation.

Now headed for Brandeis University in Boston, Mendelsohn is hoping to uncover further such unusual connections between the two communities of the time. "There's been very little work done in this area, and there's a big gap for this kind of parallel study," he noted.

And already he has piles of photocopies on his desk that still await detailed perusal.

"My Master's thesis excluded much more than it included," he commented. "There's still so much I haven't looked at and still so many avenues to explore."