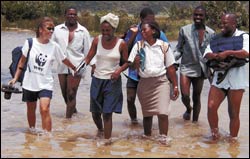 In absentia: On June 20 botany Master's graduand Ronwyn Brereton-Stiles (left in picture) will be in the United States to collect a prestigious conservation award for her work in the Kosi lake and Maputaland Marine Reserve areas of northern KwaZulu/Natal.

Tracking down Master's graduand Ronwyn (Ronnie) Brereton-Stiles took some doing. Ensconced in the wilds at Manzengwenya in the middle of the bush north east of Lake Sibiya in northern KwaZulu/Natal, where she lives and works from a small hut without "modcons", the keen conservationist keeps a low profile in terms of the outside world. However, she was "lured" from this paradise to make a trip to Washington, DC, to collect a major conservation award on June 25 and will graduate in absentia on June 20.

Conservation and sustainability are words that underpin all her work. Her Master's research was conducted at the Tembe Elephant Park in KwaZulu/Natal. Her thesis examines the use of Sand Forest species in the context of Sand Forest dynamics. It required close interaction with members of the local communities (she speaks fluent Zulu and is a great singer of Juluka songs, her botany supervisor, Associate Professor Jeremy Midgeley, told Monday Paper) to see what natural resources they used and to what end, whether for houses or muti.

According to a recent report in the Africa Geographic (May 2003), the WWF-US Women in Conservation Award represents the highest international recognition of her "tireless efforts" to institute community-driven, sustainable harvesting in the delicate ecosystems of the Kosi lake system and the 72-km coastal stretch of the Maputaland Marine Protected Area (MMPA).

Brereton-Stiles was praised especially for encouraging women, the subsistence harvesters of the area, to participate in sustainable harvesting (brown mussels, barnacles, oysters, crabs and limpets, all for food, and cowries and sea urchins used by sangomas for charms and medicines) and natural resource management.

"The inter-tidal resources were severely depleted and off take appeared to be unsustainable," she said. Women had been harvesting the area for thousands of years and with recent population increases and pressure on the resources, it was clear active management was needed. The Maputaland mussels, particularly, were becoming scarcer.

Implementing a conservation programme became almost impossible. Communities were hostile due to long-term clashes with conservation agencies over land-use.

"Months of slogging got us nowhere and we decided to focus on one community, eNkovukeni, who were willing to co-operate." The model would be used to create an example for other communities.

Her work was not without danger; she was threatened and various curses were apparently cast on her for "interfering" in the order of things.

But eventually the first rocky shore co-management committee was born, the Songimvelo "Let us conserve" Mussel Committee, made up of managers and community workers of EKZN Wildlife, Brereton-Stiles (as the facilitator and researcher) and elected representatives from among the women of eNkovukeni.

She says there were many days when just getting to work was like participating in a Camel Man adventure; a two hour 4x4 trip through coastal grassland, dune and swamp forest; a boat across Kosi First lake and then a steep dune climb and more dune forest before reaching the induna's homestead.

In addition, Brereton-Stiles co-ordinated and assisted with a number of honours projects on rocky shore ecology related to the effects of harvesting, including a project by UCT zoology honours student, Derek Morgan.

She also ran mussel stock surveys on all the key MMPA ledges, an exercise that has now been taken on by MSc student Maya Pfaff under UCT's Professor George Branch.

The stage is now set in MMPA ("after many years of blood, sweat and tears") for the establishment of a subsistence permit system, closed areas which are no longer an alarming concept for the community, given the successful Songimvelo model, she added.

She is upbeat about the WWF-US commendation. "I feel incredibly privileged to receive this conservation award for South Africa," she told Monday Paper. "Despite all the difficulties we face this has really shown me the rewards that can be reaped when people from a range of backgrounds form partnerships."