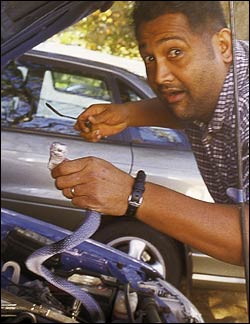 Monday Paper's Megan Morris demonstrates how not to go about dislodging sleeping serpents from your engine.

When a Meadowridge resident opened the bonnet of his car last Monday (it was wet and cold, if you remember) he took one look and closed it again - quickly. This was engine trouble of a distinctly scaly kind. Coiled around the entrails of his engine was a largish snake, possibly a Cape cobra, he thought.

His wife phoned a local radio station, desperate to find a snake charmer to rid their vehicle of its unwelcome passenger. Some years ago a Bergvliet man opened his bonnet to find a boomslang in a close embrace with his carburettor.

But don't worry; these occurrences are rare, says UCT zoologist Dr Mike Picker. It's likely the snakes were using the engine space as a temporary shelter as they are active in winter in the Cape, he explained. "They may have been exploring and ended up in a dark refuge, which cobras and molesnakes habitually use (they often stay in abandoned mole rat burrows). But it is unusual to have a boomslang trapped under the bonnet as they like sunshine and are largely tree-dwelling."

It's not a case of shrinking habitats driving these reptiles indoors either. According to Picker, it is uncommon to find these snakes in suburban settings. Cobras and molesnakes prefer the Cape Flats where they have an abundant supply of that snake delicacy, mole rats.

Cobras are also usually quite docile on cold, early mornings, especially if the previous night's temperatures were low. "They would hardly make an attempt to escape," Picker noted. Good news on one hand and bad news on the other.

If you should find a snake catching forty winks in your engine, it would probably be unwise to top up the oil and check the plugs. Nor should you attempt to prod the wee beastie with your dipstick.

Picker suggests you drive your car to an open field, carefully raise the bonnet and wait in the safety of another car while the snake makes a getaway. "Leaving the engine idling would provide the snake with some impetus to escape from the car," Picker added. If all else fails, call in the men in blue (SAPS).