Happy Sindane's fate to be determined by forensic tests 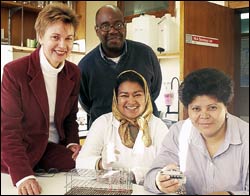 Looking for genetic markers: The UCT Tissue Immunology Laboratory has conducted over 10 000 paternity cases using methods and technology similar to those used in the Happy Sindane case. The bulk of the laboratory's work is tissue typing for organ transplants. The laboratory is headed by Professor Ernette du Toit (left) photographed with medical technologists Brian Jonas, Gadieja Timmins and Shireen Maart.

There are no forensic tissue tests that will prove with 100% certainty who KwaMhlanga teenager Happy Sindane's biological parents are, if they are among those who have come forward to claim him. The closest forensic pathologists can get to certainty is a 99.9% probability, close enough, however, to prove inclusion in a court of law, if the genetic markers forensic pathologists are tracking match up. Curious for a glimpse of what these complex forensic assessments involve, Monday Paper visited UCT's Laboratory for Tissue Immunology.

When the intrigue surrounding the origins and genealogy of the teenager, who claimed to have been abducted from a white family by a black woman, broke in the media, a frenzy was unleashed. There were rumours of kidnapping and maltreatment and even vestiges of apartheid's legacy, bound up in the old Immorality Act. As the debate raged back and forth, the children's court inquiry into the case was adjourned to June 17 to await the forensic results.

Behind the scenes, state forensic pathologists have to unravel a tangled web; whom, if any, of the people that have come forward to claim him as their son, does Happy Sindane belong to?

"Sometimes establishing paternity or maternity is as simple as a blood test, the first step in the process," said department head Professor Ernette du Toit. Now retired, Du Toit has been at the helm of the Tissue Immunology Laboratory since 1979 (having joined up in 1965). In a laboratory geared to matching tissue for organ transplants, by far the bulk of their work, a blood test is the simplest way to determine basic genetic markers needed to indicate maternity or paternity. A blood test will often include or exclude a man or a woman claiming to be a child's biological parent.

"There are examples of clear-cut exclusion," Du Toit explained. "If a child has AB type blood and the parents are O, they are automatically excluded. However, we would never exclude anyone on the basis of one test," she explained. International law demanded at least two exclusions, involving additional and more sophisticated genetic tests.

This is when forensic pathologists turn to DNA profiling. As Du Toit explained, a child receives half of their DNA from each of their respective parents, forming what pathologists define as a genetic "profile", a set of characteristics unique to each person, except identical twins. "By comparing the DNA characteristics or profile of the mother, father and child, it is possible to see whether the child carries any of the inherited characteristics from either parent."

If the DNA profile of either the mother or the father contains these obligatory maternal and paternal characteristics, then a statistical analysis can be done to determine the probability of maternity or paternity.

For paternity cases, for example, the forensic team at UCT employs a plausibility of paternity index, an index modified from Konrad Hummel's model. Hummel, a widely influential authority in the field, systematised paternity computations to the point where they could be determined by "recipe".

The top six categories match percentages against the likelihood of paternity: "A court of law will presume paternity if the calculation of probability of fatherhood is at least 99%," Du Toit explained.

But even before the blood or tissue samples reach the clinical laboratory setting, there are stringent legal requirements that must be followed. These require that blood and DNA specimens must be collected under a strict chain of custody. "Strict housekeeping it vital in a good pathology laboratory," Du Toit confirmed. "It is essential to safeguard against a mistake. In our laboratory, for example, blood tests are conducted completely separately from the tissue typing and only then do the technologists and pathologists come together to compare and discuss results."

While Du Toit agrees that this particular case seems to have been drawn out, there might be mitigating reasons. For normal paternity cases, for example, of which the UCT department has seen thousands, results can be made available within a week, or even days if the case is urgent.

In the meantime, other medical experts have determined the youth's age, as closely as is possible, in the absence of official records.

While the family with whom he was living claimed he was 18, the medical fraternity has gauged his age to be 16. Age can often be determined by extensive X-rays of the growing parts of the bones, especially the long bones, to see whether the epyphyses, or the ends of the bones, have closed or not. It is not until adulthood that these bones stop growing and the epyphyseal ends fuse to the bone.

However, age determination, especially in the juvenile, is very difficult and will probably always have a wide margin of error, says UCT forensic pathologist, Professor Deon Knobel.