Hair today, shorn tomorrow, but all for a good cause 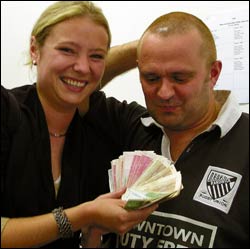 Having your hair shorn at the start of the Cape winter is one thing; having the remaining stubble peroxided to a paler shade of lemon is another. But for a group of MBA students at the Graduate School of Business, putting their heads together (in a manner of speaking) proved the best way to raise funds for Sunfield Home in Howick.

The noble gesture was born at a typical post-exam bonding session over a beer (or two) in The Brig at the Breakwater Campus. Looking for a way to express their euphoria (the five had just written a finance exam), Brendon Jones suggested they shave their heads. Someone else developed the idea, suggesting they do it for money (good business science).

The brainwave was announced in class the following day with a note that the dare would be carried out in exchange for monetary donations towards a charity, in this case the Sunfield Home for mentally handicapped children, the school Jones's sister, Allison, attends.

The shaving took place in the quad and drew a bemused crowd. Soon, five more students elected to go under the clippers. Buoyed by their spirit, senior lecturer Professor Frank Horwitz was soon standing in line for the shears (a discreet number two for him). R2 800 was quickly raised. This was when the stakes were upped.

While senior lecturer Professor Norman Faull was doing his rounds of the syndicate rooms (where students meet to work on projects), he too was drawn in and was soon sporting a shaven, peroxided head. He challenged the students to raise another R2 200. "He said he had R3 000 from a mystery donor if we could match the figure within two days," Jones reported. This they did.

Swept along, the first- year part-time MBA students gathered a further sum of R3 500, to set the total at a round R12 000. "It was fantastic how everyone pulled together," Jones commented. Bravely, MBA student Vuyo Maisela also allowed her hair to be shorn in aid of the charity drive, the only woman to do so.