And they go marching on 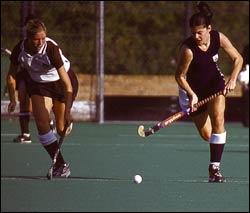 The women's hockey first side is enjoying a good season - well-placed in the Western Province Union League, the team has also of late garnered a number of provincial and national caps.

The side presently finds itself in fourth position on the premier league, only five points behind log-leaders Somerset West. UCT does, however, have a game in hand.

Individual performances have also been impressive, and a number of players have recently donned provincial and national colours. Natalie le Brun was selected for the SA under-21 squad, while Tammy Kruger and Robyn Silverton both made it into the national under-20 squad for the Junior World Cup.

According to player-coach and SA senior vice-captain, Kerry Bee, a couple more players should be smashing their way into provincial sides as well following the past weekend's Western Province trials.

UCT did, however, suffer its first defeat of the season three weeks ago, going down 1-2 to Somerset West. The loss wasn't too disappointing though, considering last year's 2-7 scoreline, said Bee, who missed the game because of international commitments to the recent SA test series against England.

"I think the team has gotten into the habit of winning - they've adopted a very competitive nature," she commented on the UCT side's marked revival over the past two seasons, capped by victory at this year's indoor tournament. "I didn't want them to be satisfied with just being in the league - I want them to be in the top three."

And Bee, who joined the side just two years ago, brings plenty to the party with her growing international experience. More recently, she and the rest of the SA squad went up against England in a drawn four-match series.

Ranked 13th in the world, SA lost the first two games against their fifth-ranked opponents, but recovered well to win the final two matches. "We hadn't played together since the World Cup in November, and we just weren't used to the pace," commented Bee on the first two clashes.

The side then sorted out their defensive and short-corner problems, and set the series up for a tight finish. "At the end of the day, a drawn series was fair," noted Bee.

The UCT side will have to do without Bee for another match in the middle of June - albeit against lowly Victorians - when she travels to South Korea for the KT Cup, where SA will go up against England, Australia, New Zealand, Netherlands and the host nation.

A formidable task awaits the side there, but with its sponsorship deals sorted out (courtesy of Spar) the team and its players can now concentrate on the on-field activities.