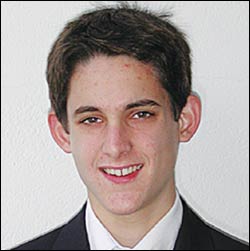 Skilled orator: Chris Ryall has been chosen as one of five South Africans to represent the country at the World Schools Debating Competition in Peru.

It might have been Bishops scholar Chris Ryall's position as the last of six children that taught him the value good communication. "In a big family you have to be clear when you get the opportunity to have your say," remarked the 16 year-old debater, who has been chosen to represent South Africa at the World Schools Debating Competition in Peru in August.

The UCT Debating Union has been hard at work to support and promote debating among schools in the Western Cape. Ryall is the only pupil from the Province among the team of five that will compete in Lima come August.

"My mother always said I would be good at debating probably because I love talking so much," the grade 10 pupil added. Shirley Lamb, assistant vice-principal (culture) at Bishops, said Ryall was an all-round achiever, as committed to his academic work, sport and music as he was to arguing a point in front of an audience. "Chris is a natural leader and debating has taught him the finer art of effective communication," she added.

The World Competition is a stiff competition that forces competitors to think on their feet while taking about a variety of topics. Debaters are given only one hour to prepare before delivering their presentations. Ryall plans to study law at UCT when he matriculates and hopes to become an advocate, a profession that will test his debating skills to the limit.