Oh so close as UCT team falters against Maties 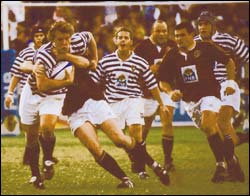 He ain't heavy: UCT's Ross Geldenhuys makes for the Stellenbosch line with a defender on his back.

The UCT coach and the sideline contingent were about ready to reach for the bubble wrap in which to safely ensconce the newly-introduced FNB Trophy, but a nail-mutilating final five minutes in their contest against Stellenbosch at the Danie Craven Stadium on May 17 had the visitors ruing lost opportunities and their failure to keep possession of the ball as they went down 18-20.

The biannual clashes of the old rivals have lost much of their sparkle and crowd-pulling appeal over the past few years, with Maties hardly stretched as they steamrolled from one victory to the next. Until last year, that is, when UCT almost embarrassed Maties in an eight-all draw in Stellenbosch, and in fact managed to do so in a famous 34-24 win at UCT, the side's first intervarsity triumph in 12 years.

Last week, decidedly more UCT students than in 2002 trekked via bus and buddies to Stellenbosch to rouse their team. And it almost worked.

The UCT team did get a bit of a shock to their system early on as the Maties touched down in the right hand corner in the very first minute of a game. Fortunately, the try was disallowed as the ball had been called out on the other side of the pitch.

It was UCT who gave the scorekeeper his first task of the day, however, when Pieter Keevy stormed through a non-existent Stellenbosch defence to score right under the goals in the eighth minute. An easy conversion by Warren Edwards took the score to 7-0.

Of concern, though, were UCT's handling errors, losing possession on a number of occasions. With four minutes to go in the first half and the score on 10-3, the ball was turned around again, and this time Maties centre Eugene Kinghorn made UCT pay for the mistake, running the ball all the way from his own 22-metre line - eluding a number of tackles along the way - to score under the goalposts (10-10 after the conversion).

The UCT game plan in the second half was to use the wind at their backs, and to punt the ball deep into the Matie half as often as possible. The tactic appeared to reap immediate rewards as UCT was awarded a penalty close to the Stellenbosch poles early in the second half, but Edwards missed the kick as things started to go awry for him in the match.

UCT kept up the pressure though, and Ross Geldenhuys scored a try in the 10th minute of the second half. Edwards was unlucky to have his well-hoisted conversion called wide by the touchline judges as the ball flew high above the posts (18-10).

He would miss another penalty later, however, as he struggled to keep the ball on target in the swirling winds.

For the final 20 or so minutes of the game, the Maties monopolised possession and camped out in the UCT half, forcing more turnaround balls and snapping up a couple of poor UCT lineouts. A 67th minute penalty took them to within reach of the UCT score (18-13), and with only three minutes' official time left, they finally broke through the UCT defence to crash over for a try, the successful conversion giving them the lead for the first time in the match (18-20 to Maties).

But while the Stellenbosch fans were still opening celebratory cans of lager, UCT was awarded an extra-time penalty and offered an eleventh hour opportunity to snatch victory. Edwards' 40-metre kick at times looked destined to return the FNB Trophy - introduced last year to the intervarsity - to UCT, but the ball finally drifted left of the uprights, and the referee called it a night.

Although dejected, the UCT side ran up to their disappointed but still cheering supporters for a wave and a bow. They were also applauded off the pitch by former Springbok captain Francois Pienaar, who recognised that, even when the chips were down, they kept on fighting.

Of the five UCT teams to make the journey to Matieland, only the third XV managed a win, outscoring their opponents by 25-20. The second XV were hard done by, losing 15-16 to a disputed last-minute Stellenbosch try.