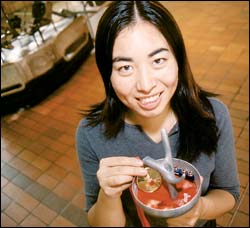 On the road again: Shih-Ya Huang has improved her national ranking after winning gold at the recent Natal Fencing Open.

Shih-Ya Huang did her national fencing rankings the world of good when she took first place in the senior ladies' epÃ©e at the Natal Open, staged at the University of Natal's Durban Campus in late April.

UCT sportsperson of the year in 2001, Huang neglected her fencing a bit last year as she focused her attentions on her studies and some other extra-mural commitments. Now in the honours year of her business science degree in information systems, she decided it was time to do some repair work on her rankings, having slipped from second to fourth spot.

The gold in epÃ©e - her weapon of choice - at the Durban meet, one of the six major tournaments on the national calendar, saw her jump back to second place in the ratings.

The medal (certificate, actually) also improves her chances of making it into the South African squad to compete at the World Championships in Cuba later this year. In addition, it means that, as one of the women's top three, she can again compete in the men's events.

"Which is quite nice, because after a while you start to stagnate, and you get used to your [women] rivals," Huang ruminated. "But then you meet the guys, and it's totally different because they are a lot stronger, and you have to adapt to that."

Which she's done quite well - so while she still gets beaten back by "sheer brute force", she and the other women have managed to cause quite a few upsets in the men's competitions. As happened at last week's Western Cape provincial tournament, where, in addition to winning women's gold in the epÃ©e (again), Huang also coulÃ©d and coupÃ©d her way to sixth spot in the men's event.

"And the guys really don't like that," she says with a mischievous grin.