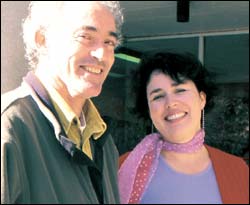 On the ball: Gender researcher Dr Helen Moffett (right) and producer Mark Kaplan whose two documentary films on cricket act as a "handy gauge of our progress as a nation".

Cricket and rape are probably at opposite ends of the spectrum when it comes to gender research. But for UCT Fellow Dr Helen Moffett, cricket has provided an unexpected (as well as enthralling) platform on which to build her work on the construction of male identity. Cricket is also a perfect foil for her other academic pursuit; her "dark research" on rape.

Moffett was on hand to provide illuminating glimpses of the making of the first of two documentaries on cricket, Reverse Swing: Levelling the Playing Fields, commissioned by Super Sport, produced by Mark Kaplan and recently screened at the Centre for African Studies.

Cricket might seem a rather startling topic for a gender researcher (Moffett is a Fellow of the African Gender Institute and the Centre for African Studies). It's even more surprising to learn that she was associate producer of the films about this "gentleman's game".

"Cricket," she observes, "reminds me why I like men." She smiles, but it is not flippant comment. "This is especially important given the very dark research I do on rape."

Gender violence in South Africa provides researchers like herself (she has a PhD in pre-Raphaelite poetry and is described as a "serious scholar") with a growing and disturbing archive of material. Moffett claims that cricket, with its emphasis on "noble" moral qualities such as fair play, honour, patience and respect for one's opponent, is one thing that helps to keep her sane.

Both films, Reverse Swing: Levelling the playing fields, and Reverse Swing: Field of dreams, were shot during the Pakistan tour of South Africa at the end of 2002 and cover the build up to the World Cup. "The intention was to use cricket as a barometer to measure South Africa's identity as a nation," she explained.

Kaplan had heard of Moffett's course on cricket and post-colonialism, The Empire Strikes Back. He had put together a treatment for a film series by the same name and invited her to join him as associate producer. "I had no idea I'd be running around the cricket pitches of the country," she laughed.

The footage slips back and forth between contrasting scenes: from dusty rural pitches to glamorous stadia like Newlands, between young black rural club players to cricketing greats like Omar Henry and Shaun Pollock, and including administrators, commentators, spectators and even ice cream vendors.

Each interview provides a fascinating and often contradictory slice of what cricket represents in this country. There is the rural mother, Lorraine Bonya, washing whites over a plastic tub, the sound of chickens in the background, discussing her plans to form a woman's team ("because are no jobs in the Eastern Cape").

And then there is the young captain of the township league team, standing on a pockmarked oval resplendent in his cricket whites, talking of the importance of being a gentleman. Stereotypes are demolished and reinvented, frame after frame. But nothing was staged - and this fascinated Moffett.

"Cricket informs me about empire and colonialism in new and innovative ways. It's the classic example of how former colonies have taken something traditionally imposed and transformed it; think of the way the stellar Pakistani bowlers Wasim Akram and Waqar Younis perfected the technique of reverse swing, where the ball swings in the opposite direction to the one expected."

A prolific writer in the gender field, Moffett is also working on a book, described as the "definitive cricket coaching manual", with UCT's Professor Tim Noakes and former Proteas coach Bob Woolmer, due out at the end of the year.

And with the Proteas' series against England coming up, Moffett has steeled herself to avoid the small screen. "Otherwise a quick look turns into five hours of watching, and I don't have the time," she lamented.

(Don't miss the next documentary, Reverse Swing: Field of Dreams, which will be screened in the Centre for African Studies Gallery on Tuesday, May 20 at 13h00.)