Basic Income Grant: Cast the net as widely as possible

In this edited version of part of his inaugural lecture, Professor Jeremy Seekings of the Departments of Political Studies and Sociology argues for a serious consideration of the introduction of a Basic Income Grant to alleviate poverty. His topic was "Providing for the Poor: Welfare and Redistribution in South Africa".

The South African welfare state provides a remarkably efficient mechanism for redistributing from rich taxpayers to the many poor people, including especially the elderly poor. Compared to the share of tax revenues redistributed in this way, the money we donate to charitable organisations or to individuals at intersections is probably just "small change".

But is paying tax enough? Should we be content with the existing provision of public welfare, or should we worry that "South Africa's social safety net has a very loose weave", in that it makes no provision for people who are unable to earn a living because there are no jobs available?

In 2000, the Government appointed a Committee of Inquiry into a Comprehensive System of Social Security for South Africa, chaired by Viviene Taylor (from UCT's Department of Social Development). The Committee proposed the introduction of a universal basic income grant (or BIG), a grant of R100 per month payable to every South African citizen, rich or poor, guaranteeing a minimum income. A basic income grant would lift as many as six million poor people above the poverty line, abolishing destitution.

The first objection to the introduction of a basic income grant is the financial cost, which - at about R54-billion - is immense. The most credible proposals for financing a BIG, by Pieter le Roux, entail an increase in Value-Added Tax (VAT) from the current 14% to 21%, together with proportional increases in excise and levies (including, especially, "sin" taxes on alcohol and tobacco). Increasing VAT means that the poor as well as the rich will pay more in taxation, so that the net benefit to the poor is less than the R100 per month nominal value of the BIG itself. Because the rich spend much more, they pay much more in extra sales taxes. People in the middle would pay in extra tax about what they received through the BIG. Overall, about R15-billion would be taken from the richest 20% of households each year and redistributed to the poorest 50%.

Is this kind of tax increase affordable? Of course, no one likes paying higher taxes. Opinion polls show that the public's enthusiasm for increased state spending declines if taxes are to be increased. In a survey in Khayelitsha and Mitchell's Plain in 2000, we asked whether the old-age pensions should be increased. Sixty percent of respondents agreed strongly, and almost nobody disagreed. When we asked whether pensions should be increased "even if it means that people like you have to pay higher taxes", the proportion of respondents who agreed fell by half, and more people disagreed than agreed strongly.

Higher taxes may have macro-economic costs. The ANC and the Treasury say that a BIG is unaffordable and would deter foreign investors and impede economic growth. I am not a macro-economist, but I am sceptical of treating affordability as an absolute. Every major welfare reform in South African history has been opposed by some on the grounds of affordability. The assertions made today by the ANC and the Treasury about the cost of a BIG echo assertions made by conservatives about the cost of introducing old-age pensions in 1929, assertions made by National Party MPs about the cost of extending old-age pensions to African people in 1944, and the same party's assertions in subsequent decades about the impossibility of equalising white and African pensions. Yet the expenditures opposed so vociferously often come to be accepted without question later. Consider also the history of income taxation in South Africa. What is an affordable level of income tax? During the Second World War income taxes were raised from less than 2% to more than 6% of GDP; levels considered unaffordable before the war were accepted as affordable thereafter. Events such as war clearly redefine what we think of as appropriate levels and patterns of public expenditure. Do we need a war today to redefine our understanding of the basic responsibilities of society to its poorest members? The Minister of Finance actually reduced income taxes in recent budgets. Do the social benefits of reduced income tax really warrant the costs of not providing the poor with a minimum income?

Another objection to the proposed basic income grant is that the costs and benefits of alternative policies have not been assessed. Even if the benefits of a basic income grant are immense and the cost is, in some sense, affordable, might not similar benefits be obtained more efficiently through spending money on other policies? This, like the issue of cost, is a serious concern. There is a clear need for a thorough assessment of the costs and benefits of alternative anti-poverty interventions, including public works programmes and the extension of the existing child support grants (which is what the Government announced in this year's budget). The provision of anti-retroviral drugs to people living with HIV or AIDS is also something that requires more serious consideration by the state. 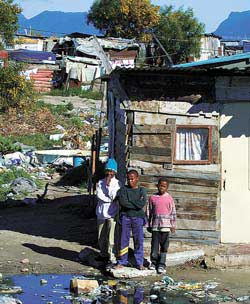 The final major category of objections to the basic income grant concern its supposed social or cultural effects. These objections all too often seem ideological. Government ministers contrast a "developmental" approach to welfare, which they think is good, with one revolving around "hand-outs", which is considered bad. Officials warn of a "culture of entitlement" and stress intead the "dignity of work". Does this mean that the government believes that non-working, able-bodied adults are undeserving of assistance? Even the most successful job creation strategy and the most ambitious public works programmes will not provide jobs for all who want them. Are the remaining unemployed to be cast aside? It is alarming that the ANC has appropriated not only the discourse of unaffordability that was championed by the National Party for so long, but also the National Party's discourse of the undeserving, "idle" poor.

The great British sociologist Thomas Marshall wrote in 1949 of the social dimension of citizenship, that is the rights "to a modicum of economic welfare and security .[,] to share to the full in the social heritage and to live the life of a civilised being according to the standards prevailing in the society". Marshall himself, like the other great social scientists of his generation, recognised the importance of full employment to the achievement of social citizenship. He was, after all, writing in the aftermath of the Great Depression. Today, in 2003, we should once again recognise the importance of full employment. Job creation is clearly preferable to the public provision of welfare. Poor people themselves prefer jobs to grants. Job creation should be a top priority for the government; sadly, it is not.

But even if we accept the priority of job creation, what do we do in the short term for those millions of people who want work but cannot find it? Do we do nothing for them and their dependants?

In both 1929 and 1944 welfare reforms were enacted on the basis that society, through the state, had a responsibility to assist those who were unable to work and who could not be supported by their kin. We might call this the foundational principle underlying the design of South Africa's welfare state. Under apartheid, this principle was abandoned.

Unemployment grew. Many poor people were unable to work, not because they were old or disabled or caring for children but because there were no available jobs. The apartheid state declined to reform the welfare system to make provision for this new category of poor people unable to work. Today, in a post-apartheid era, we must ask whether we wish to continue the practices of the apartheid state or return to the foundational principle of the pre-1948 period.

I do not mean to belittle objections to the BIG. The cost is immense, and its merits relative to alternative interventions have not been established beyond doubt. But it seems to me that we should, as a society, be engaging seriously in a debate on the extent of our responsibilities to the poor. Sadly, the ANC and the government appear to prefer to stifle rather than to promote debate on these issues.

It seems to me that we have a responsibility, as privileged members in this society, to push the state to comply with the constitutional requirement to realize progressively socio-economic rights within the constraints of available resources.

If this is not to entail a BIG, then the onus is on the state to explain why not, and how the rights of the poor unemployed are to be realised progressively without welfare reform. Donating money to charities or to people at intersections might be a worthy activity, but it is no substitute for sustained pressure on the state to use tax revenues efficiently in existing and new ways for the benefit of all members of society. We are fortunate to have inherited a welfare state, founded on the principle of providing for the needy, and which survived the hostility of the National Party in the decades of grand apartheid. Let us now act to ensure that it provides for all of the needy members of our common society.