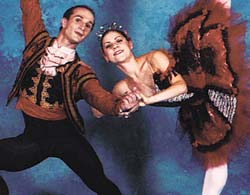 Michelle Louw and Daniel Rajna in a scene from Don Quixote that runs at Artscape Opera House until May 17.

Veronica Paeper's productions of Don Quixote and Orpheus in the Underworld are being presented at the Artscape Opera House during the month of May.

Don Quixote, presented by the Cape Town City Ballet in association with Artscape Opera House, runs until May 17. This ever-popular ballet is based on the hero of the novel, Don Quixote, which was written by Miquel de Cervantes. The Don, driven by his vision of Dulcinea and his mind totally twisted by tales of chivalry, sets out on his wild adventures with his trusty squire, Sancho Panza.

The production stars guest artists Agnes Oaks and Thomas Edur, who are rated as one of the best ballet duos in the world and who dance the leading roles of Kitri and Basilio at three performances. Their visit has been made possible by British Airways.

Cape Town City Ballet's Marianne Bauer, Tracy Li and Michelle Louw, partnered by Johnny Bovang and Daniel Rajna, will dance the other performances. The melodic score is composed by Ludwig Minkus and will performed by the Cape Philharmonic Orchestra, conducted by David Tidboald.

Orpheus in the Underworld is presented in association with Artscape at the Artscape Opera House from May 8 to 11. This highly comical ballet is based on the Greek legend of Pluto, god of the Underworld, who falls in love with Eurydice, wife of Orpheus, and lures her to his kingdom.

Paeper has based her ballet on Jacques Offenbach's operetta and sets the action in the 1920s with the character Pluto as the head of a Mafia-type underworld and the character Public Opinion as Calliope, Orpheus' mother. The composer, Offenbach himself, keeps an eye on the proceedings.