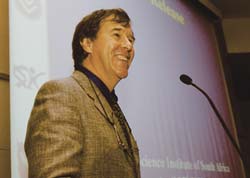 It may have taken 18 years of debate and dissension, but Professor Tim Noakes and his trusty band of researchers and students at the Sports Science Institute of South Africa (SSISA) have finally won over the minds and hearts of the American sports science fraternity.

At the heart of the cross-continental polemic lay the issue of how much athletes participating in endurance events should be drinking. While, for some time now, scientists at the SSISA have been arguing that runners are consuming way too much water and sports drinks during races, with sometimes fatal consequences, their US counterparts (along with some big-name sports drink producers) have in fact been advising athletes to drink as much as possible, citing the need to counter fluid loss due to sweating.

According to Noakes and local scientists, this overindulgence in fluids leads to a condition known as hyponatraemia, as too many liquids dilute the body's necessary salts and athletes end up with low sodium levels. Hyponatraemia can cause anything from confusion and disorientation to seizures and, as has recently happened in the United States, death.

The white flag from the scientists' American counterparts arrived in the form of an email in Noakes' inbox two weeks ago, which noted that USA Track & Field (USATF), the American governing body for track and field, long-distance running and race walking events, had announced major changes in its hydration guidelines. A quick browse through the organisation's website - www.usatf.org (see Hydration Guidelines under the site's Featured Items) - reveals two documents issued by USATF, one being a 2002 advisory statement (an article that had actually "disappeared" for a while) by Noakes and Professor David Martin of Georgia State University.

Noakes pointed out that most of the references in both pieces happened to be South African.

According to Noakes, the new guidelines presented a major shift in policy away from those of the American College of Sports Medicine (ACSM). Whereas the old guidelines called for athletes to drink more than a litre of fluid an hour, or as much as they could tolerate, and advised them to drink before they became thirsty, the new ones are based on starting out well hydrated and only drinking during the race in response to the sensations of thirst.

Speaking at a press conference at the SSISA on April 25, he added that these guidelines were for the first time applied to the 2003 Boston Marathon (run on April 21), a race that had been plagued by hyponatraemia in the past. The death in last year's race of a 28-year-old woman who drank too much sports drink during the race may, in fact, have sounded the knell for American resistance to local findings, he added.

Tracing the history of the polemic, Noakes pointed to early attitudes to drinking during running, which varied only according to the eccentricity of the athlete. Marathon runners during the early 1900s, for example, almost all eschewed either water or foods, opting instead for chewing gum, alcohol or cocaine (then still considered a harmless performance enhancer), among other odd restoratives.

Up to the 1960s, most runners still shunned fluids during races, but did extremely well, Noakes said. The growing popularity of the sport and the sudden surge of recreational runners in marathons around the world in the mid-1970s, however, demanded new guidelines, which almost exclusively advocated for the increase in fluid consumption.

The World Marathon Guide of the early 1990s, for example, advised participants to "drink big", and commented that "dehydration is one of the most common causes of premature fatigue".

"These guidelines were based on the theory that any dehydration that you develop during exercise is detrimental to your health and performance," said Noakes. "But you then have to ask yourself: how were people able to run without drinking - and break world records - in the past?"

Commerce, mostly in the form of sports drink producers, also had a hand in encouraging runners to drink more, he observed.

In South Africa, too, runners (Noakes included) were asking for more water points during races. The first case of hyponatraemia in South Africa came about in the 1981 Comrades, the year organisers first capitulated to these demands and set up more water stations, when one woman became increasingly disoriented, was diagnosed as being dehydrated and was intravenously administered two litres of fluids. Almost immediately following the IV, however, she had to be hospitalised as she had developed a seizure and lapsed into coma. Only then was she correctly diagnosed as having low sodium levels and treated accordingly.

While Noakes and other researchers had no idea at the time what had caused this patient's fall in sodium levels, subsequent incidents and research, notably by Dr Tony Irving who completed his PhD on the topic at UCT, provided them with "absolute" proof in 1991 that the hyponatraemia was a result of water intoxication.

Further research and articles - and a handful of rejection slips from American journals - still did not convince the ACSM, however. "It might as well have been published in Chinese for all the attention it received," said Noakes of Irving's definitive 1991 article that did manage to get into print in the US.

In spite of this, 250 reported non-fatal cases and eight fatal cases between 1985 and 2002 in the US and elsewhere - modified hydration guidelines had for some time been implemented in South African races - did little to change attitudes, noted Noakes. The death in last year's Boston Marathon, described as entirely preventable by one medic, may however have been the final straw that broke down American resistance, he added, not least because of the fear that future deaths would evoke litigation.

The email and the changing guidelines also marked a significant victory for local scientists, Noakes commented at the recent gathering. "This is a celebration of science and the fact that we can actually do good science in Africa that even the US needs to take note of," he said.

Equally complimentary of the many contributors was former South African rugby captain MornÃ© du Plessis, who co-founded the SSISA with Noakes. In his epilogue, Du Plessis recalled the "science lesson" Noakes gave him years back, in which the latter noted that science was nothing more than asking questions, and that good science was asking the right questions.

"I would just like to add to this credo," Du Plessis said, "that brave science is asking questions that others are afraid to ask."