Jewel in UCT's crown to be digitised for world's scholars 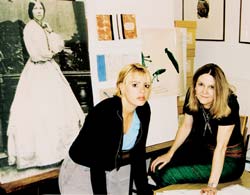 Capturing history: Prof Pippa Skotness (right) and her assistant, Eustacia Riley, are categorising and indexing the Bleek Lloyd Collection so that it will be fully searchable on the new website being developed. (Lucy Lloyd pictured in the background.)

FUNDING of more than R1-million from De Beers, the Mellon Foundation and the Scan Shop (who are subsidising scanning costs) will underpin the huge task of digitising one of the world's largest and richest folklore collections, the Bleek Lloyd Collection, one that captures the lost language, customs and mythology of the indigenous but now destroyed /Xam people.

Professor Pippa Skotnes from the Michaelis School of Fine Art is devoting much of this, her sabbatical year, to the digitisation of the Collection, "one of the jewels in the UCT crown" she says, to create a web-based resource that will be available to scholars around the world.

Compiled by Lucy Lloyd and her brother-in-law, German linguist, Wilhelm Bleek over a period of 15 years during the latter part of the 1800s, the Collection is considered by archaeologists, ethnographers, linguists and others as a significant link to a lost culture and language, and offers scholars a rare opportunity to "fill in one of the tragic blanks in South Africa's history".

The 14Â 000 page collection includes interviews, conducted in Bleek and Lloyd's suburban Mowbray home, with /Xam (San) prisoners who were incarcerated at the Breakwater Convict Station after the Korana War of 1868, and later with !Kun speakers from northern Damaraland.

It contains lexicons, Bleek family records, biographical information, drawings, watercolours, photographs and correspondence with family and colleagues in many parts of the world.

The UCT Manuscripts and Archives, the National Library and the South African Library hold the collection jointly. In 1997 it was listed as a work of world significance on the prestigious UNESCO Memory of the World Register, the highest honour any historical document or collection can receive.

In 1870 //Kabbo, one of a few /Xam convicts held at the Breakwater prison, met Bleek and Lloyd, who realised the future of this language was in danger. With //Kabbo as their first teacher, Bleek and Lloyd managed to study the language and gain important insights and interpretations of the rock art their fathers and grandfathers had made.

After Bleek's death in 1875, Lloyd worked on alone for a further 10 years, collecting the /Xam stories and oral history and making the major contribution to the Collection.

"Lucy was a remarkable woman and a visionary scholar," Skotnes said of Lloyd. By 1910 when Bleek's daughter, Dorothea, visited descendants, no-one could remember any of the /Xam stories, nor did they speak the language. And although Lloyd and Dorothea and others published several works from the corpus, much has remained unpublished and, in a sense, hidden.

Skotnes began working on the Collection in 1986, and later published a book with Professors Nigel Penn, Stephen Watson and John Parkington (which won a UCT Book Award), Sound from the Thinking Strings, which drew on the material. "But I felt it required some serious curation," Skotnes noted.

Once high resolution scans of the material have been completed, a major website will be constructed, through which the full Collection can be accessed. One of Skotnes' and her assistant, Eustacia Riley's largest tasks has been to develop a way of categorising and indexing the Collection so that it will be fully searchable. The duo began their work in November last year and hope to have the website up and running before Christmas.

The Mellon Foundation has a global programme of digitising significant collections and making these available to scholars. "We are now part of that programme and derive the benefit of access to other collections that they have digitised."

"When Lucy Lloyd learnt the /Xam language from //Kabbo, who was described as a careful narrator, he said that he was very keen that his stories should become widely known by way of books. He couldn't have had any sense of what the worldwide web might be," she commented. "But I think he would have been pleased."