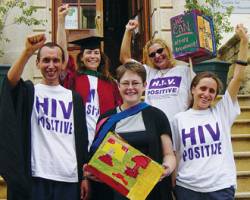 March on: (From left) Jonathan Morgan, Professor Nicoli Nattrass, Beatrice Conradie, Jo Stein and Anya Subotszky. All are attached to the Memory Box Project of the AIDS and Society Research Unit at UCT (except for Conradie, who is from the economics department). The Project is an outreach programme providing training and support for HIV positive people.

UCT's Memory Box Project, which operates an outreach programme for HIV positive people in Khayelitsha and other townships, joined the recent Treatment Action Campaign (TAC) march to demand that government commits itself to the provision of anti-retroviral drugs in the public health sector. The Memory Box Project is associated with the AIDS and Society Research Unit (ASRU) at UCT.

â€œIt operates on the principle that people with AIDS should be counselled, supported and provided with hope and dignity,â€ said the project's Jo Stein.

â€œIt is unacceptable for people to suffer without hope and to die unnecessarily quickly of HIV/AIDS when proven treatments are affordable, making HIV/AIDS a chronic manageable disease.â€

She added that nearly five million South Africans were HIV positive and if nothing was done, most would die over the next decade.

According to researchers at the Memory Box Project, all the arguments and excuses that stand in the way of the government providing life-saving and life-enhancing medication were simply â€œnot validâ€.