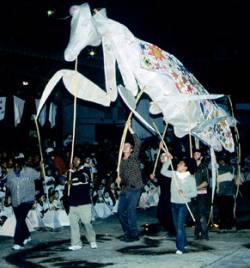 Larger than life: A scene from the art and drama workshops and procession in Clanwilliam, facilitated by UCT and sponsored by Fairheads International Trust Company.

THE LIGHTS from handmade lanterns wind through the streets of Clanwilliam as throngs of schoolchildren participate in an annual ritual: symbolising the fruits of a remarkable sustainable development project run by UCT.

Named Living Landscapes, the venture encompasses various disciplines, including archaeology, education, art and drama, and is aimed at returning the heritage of the Clanwilliam area to the community to be cherished and sustained for future generations.

It has evolved in a multi-disciplinary way over the past seven years and is transforming the way in which the poverty-stricken community in this small country town views its environment and heritage.

Professor John Parkington (Archaeology) won UCT's 1999 Pifer Research Award for his contribution to the enterprise. â€œThe archaeological heritage of the area, in the form of rock paintings, surface scatters of stone tools and archaeological deposits in caves and shelters, is a rich archive of potential information on long-term social and environmental history,â€ he explained.

He said the project was a resource that could play a substantial role in job creation. â€œTwo immediate possible uses for these resources are the transformation and enriching of school curricula and the development of small sustainable businesses for local people,â€ he added.

The project has steadily taken root. In 2000, UCT bought an old school in Clanwilliam for teaching various aspects of the curriculum to scholars. The Department of Tourism recently gave Parkington a grant to expand a job creation project housed in a workshop adjacent to the school. This has already created 18 embryonic jobs in catering, crafting and guiding.

Recent news is that Clanwilliam is to be twinned with Les Eyzies in France, generally acknowledged as â€œthe rock art capitalâ€ of the world. The mayor of Les Eyzies visited Clanwilliam late last year.

Fairheads International Trust Company now sponsor a pilot project in Clanwilliam; a competition and programme of art workshops to get young people involved in creative activities (like making flags and lanterns), and drama workshops. Held over two weeks in September each year, these are facilitated by UCT art and drama students.

Professor Pippa Skotnes (Fine Art) said it was exciting to think that the Clanwilliam children were probably descended from some of the first artists in the world.

â€œThe interactive work we do with them helps them understand this heritage, and makes indigenous information accessible to them once again. The images we work with come from the rock art of the area and the narratives from the /xam; stories recorded over 100 years ago.â€

Last year the theme was the wind, which carried the stories and the time, which reflected a circular rather than linear approach to the cosmos.

Chair of Fairheads International Trust Company, Peter Fairhead, said the project had taken on a life of its own. â€œIt is now about stewardship; the project is bigger than the individuals involved. One gets a sense of this as you see the children with their lanterns, winding down the streets. Something powerful is happening in Clanwilliam.â€