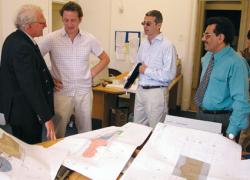 IIDMM update: Prof Wieland Gevers (left), interim director of the new Institute of Infectious Disease and Molecular Medicine, and Prof Iqbal Parker (right) discuss the Institute's new facility with Edward Jackson (second from left) and Daniel Peltz, stepson and son-in-law respectively, of Lord Wolfson of Marylebone. Lord Wolfson is chairman of The Wolfson Foundation, which has given R6.4-million towards the Institute's new "link" building.

UCT and the Institute of Infectious Disease and Molecular Medicine (IIDMM) received two special visitors to an otherwise quiet Campus at the end of December.

Edward Jackson and Daniel Peltz, stepson and son-in-law, respectively, of Lord Wolfson of Marylebone, chairman of The Wolfson Foundation, were the guests of IIDMM interim director Professor Wieland Gevers, who brought the visitors up-to-date on building operations at the IIDMM headquarters on the health sciences campus.

In January last year the Foundation awarded UCT some R6.4-m, issued in instalments over three years, towards the IIDMM's new â€œlinkâ€ building.

The Foundation funds projects that further the development of medicine and healthcare, science and technology and arts and the humanities. Between 1994 and 2000, UCT received over R3-m from the Foundation, which is one of the largest charitable organisations in the United Kingdom.

The Wolfson Computer Laboratory in the Health Sciences Library, which opened in 1996, was developed as a result of a Wolfson grant, as was the Science and Technology Library at UCT.