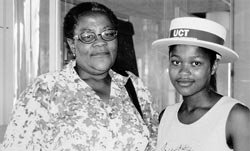 Welcome to UCT: Among the record crowd during parents' orientation on February 4 were first-year science student Thembisa Tshoko, who matriculated from Fezeka High in Gugulethu, and her grandmother, Miriam Tshoko. Why has Thembisa chosen to study at UCT? â€œIt's the best,â€ she confirmed.


A RECORD 1 774 people flocked to UCT for parents' orientation on February 4, contributing to the event's â€œresounding successâ€. According to one of the organisers, head of functions Judy Smit, over 900 parents, more than half of those who attended, were from out of town.

The latter included visits to information stalls, every hour-on-the-hour talks, library and Campus tours, a welcome by the Vice-Chancellor, Professor Njabulo Ndebele, and addresses by deans.

These were last on the programme, some sessions ending at 21h30, which indicated volleys of questions and a healthy interest in academic matters. The event was also timed to coincide with the opening of residences.