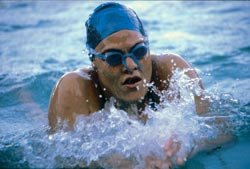 On the swim: Preparing for the 2004 Olympics while studying towards a BSc degree will keep Natalie du Toit very busy over the next months and years.

SHE HAS a few more constraints than most when it comes to negotiating her way around the step-heavy Upper Campus, but the many friendly salutations from students and the helpful advocacy of staff have made orientation and registration over the past few weeks that much easier, recounts Natalie du Toit, the South African swimming superstar who this year starts her undergraduate studies at UCT.

Du Toit will this week begin work on her BSc degree, and plans to specialise in human genetics and physiology. All this while trying to qualify for the 2004 Olympics in Athens.

Du Toit first made newspaper headlines early in 2001 when, just months after losing half of her left leg as a result of a scooter accident, she returned undaunted to her favourite sport. She then became a household name when, at last year's Commonwealth Games, she won the women's 50-m and 100-m Elite Athlete with a Disability (EAD) freestyle events, and, against all odds, also qualified for the 800-m open final.

Not only did Du Toit complete the swim in a personal best time, but her determination also earned her the inaugural David Dixon Award as the most outstanding athlete of the Games, the highlight of her career thus far, she says.

Academia may pale in comparison, but studying at UCT is an important part of her life, however, as it not only serves as a break from her demanding training regimen, but is also the realisation of a longstanding ambition, observes Du Toit. Her interest in human genetics and physiology can be traced back to her school years, although her own disability, she admits, has added a new dimension to her studies.

â€œI've been wanting to study for so long,â€ recounts Du Toit, who spent time â€œjob shadowingâ€ at University of Stellenbosch labs while still at school.

â€œBut because I do have an amputation, I want to see what muscles I can use to compensate for this, and to get a little more knowledgeable about my body and see if maybe I can help out my back a bit,â€ she notes of her interest in physiology, and referring to the chronic back problem that besets most people who have a similar disability.

In the genetics lab, she hopes to direct her research into the area of limb development, specifically into the possibilities of growing fully functional legs.

But while her swimming career is still on the up and she has to rise (along with her puppy) at four-thirty in the morning to head for her first training session of the day, Du Toit will in the meantime concentrate on starting a â€œbasicâ€ degree, which the Faculty of Science has kindly agreed to modify to accommodate her sport's demands.

And with her sights firmly set on the Athens Olympics, she will have plenty to keep her busy, notably the Barcelona meeting of the qualifying 2003 Mare Nostrum series in June.

In addition, she continues her travels around the country – a week-long itinerary that includes visits to Pretoria, Johannesburg, Kimberley, Durban and Cape Town's Spier appears nothing unusual – to deliver what her agent Dave Rundle has dubbed The Natalie Affair, a talk in which she reflects on her personal experiences and on overcoming a debilitating injury. Speaking to Monday Paper, she sings the praises of her supportive family, and the solace provided by her faith.

â€œI believe that my accident happened for a reason, and I've got to use it positively,â€ she says. â€œI've lost half a leg, but I still believe I can do what everyone else can do and what I could do before my accident.â€