Cricket: It's all about mental toughness 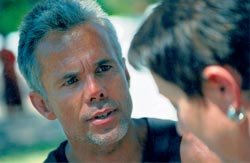 WHO doesn't cringe at the memory of a batless Allan Donald being run out in the semis of the last Cricket World Cup, with one run needed to beat Australia?

His body language summed up a nation's reaction: disbelief, confusion and despair. In the hiatus of the snatched victory, which took them to the final against Pakistan, the Aussies gloated. Worse, Steve Waugh's men dubbed the Proteas â€œchokersâ€, a label that has dogged the team at times of high pressure.

In an interview with The Week, an Indian weekly magazine (Feb 20, 2000), Waugh attributed the CWC victory to his team's mental toughness, adding that he wrote motivational poems for them each night during the tournament.

Mental toughness, says UCT psychology lecturer and sports psychologist, Dr Helgo Schomer, is the key ingredient to any sports team's or individual's hopes of glory. In many instances, big match temperament (BMT) is all that stands between winning and losing. And the higher you climb, the more BMT comes into play.

Mental training, however, needs as much attention as fitness, technique, tactics and nutrition, he adds.

Writing on the subject in Sports Medicine (July 1996), Schomer recalled the words of Mark Spitz, winner of seven gold medals in the Munich Olympics. â€œAt this level of physical skill, the difference between winning and losing is 99% psychological,â€ the swimmer said.

Mental training is not a quick fix for ailing performance. â€œThe mind changes reluctantly,â€ Schomer comments. â€œThe most counter-productive time to implement a psychological skills training programme is at the start of the tournament. It can be detrimental to make athletes aware of psychological aspects of competition that should be addressed, when there is insufficient time to learn the new psychological skills used for control,â€ he notes.

Cricket is widely acknowledged to be a â€œmind gameâ€ and cricketers, like other athletes, need time to internalise learnt mental strategies.

Having worked extensively with individuals and teams (he is presently working with soccer side Hellenic), locally and abroad, Schomer knows the ideal â€œperformance stateâ€ does not just happen.

â€œThe best preparation in the countdown to competition rituals involves behavioural sequences that get the athlete physically and mentally ready for competition. The ultimate goal of psychological skills training is for each athlete to learn how to create consistently at competition time the ideal performance state — thoughts, feelings, body responses — associated with their peak performance.â€

Competition is all about stress, he continues. â€œIt's about producing a peak performance at the right time. A negative psychological set, such as feelings of anger, fear, worry, negative thoughts and task irrelevant thought impair performance. When these induce palpitations, a dry mouth, tight muscles and poor concentration, an athlete can't perform optimally. Sport scientists agree that most performance errors arise not so much from under-arousal but over-arousal when athletes don't cope with competition anxiety.â€

Progressive relaxation techniques are taught to ensure muscles remain loose and the athletes can control their arousal levels again. â€œThe winner is the one who focuses everything on the moment, on the game, nothing is spent on anything irrelevant to the task,â€ Schomer points out.

But while BMT has been spoken and written about, he says there is no distinguishable â€œathletic personalityâ€. â€œBut there is a profile that emerges among elite athletes: they consistently self regulate their arousal (feeling energised yet relaxed); they have superior concentration; high self-confidence; determination and control.â€

The Australians, for example, have also been working the mental edge for years. â€œThey take it as seriously as their physical training. In this country, we're only beginning to wake up,â€ Schomer remarks.

Recent research in the Western Cape alone shows that most local sportspeople don't follow mental training programmes. â€œBut they are eager and the more exposure we get to the international arena, the more we will realise how important it is to have a multi-disciplinary team supporting our athletes.â€

Mental toughness will also help a cricketer deal with the sledging and posturing that has become an integral part of the game. â€œIn tennis, John McEnroe did this exceptionally well,â€ Schomer observes. Cantankerous but creative, his verbal abuse threw his opponents completely.

â€œRefining and perfecting mental skills is a lifelong practice, just as physical training is. Only a select few will bring all components together consistently. They are the elite,â€ he concludes.