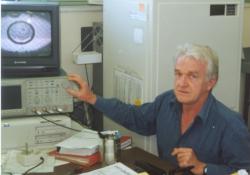 
DR JOHN Fenn, Koichi Tanaka and Dr Kurt WÃ¼thrich; the names may not mean much to the average reader, but the distinguished trio of scientists shared this year's Nobel Prize in Chemistry.

Their achievements? Each was involved in the development of novel techniques for rapidly and reliably identifying and mapping large biological molecules. These are the macromolecules that underpin all life (plant and animal), and include proteins, polysaccharides and DNA. By studying macromolecules, scientists can begin to answer many questions about the processes of life.

Their pioneering work has had direct significance for UCT. Three pieces of equipment employing these techniques, the electrospray mass spectrometer (ESI), the MALDI (Matrix-Assisted Laser Desorption Ionisation) mass spectrometer and the NMR (nuclear magnetic resonance), are all housed within the Molecular and Cell Biology and Chemistry Departments. UCT's MALDI, housed in Molecular Biology, is the only one of its kind in Africa (although Wits will apparently soon acquire one).

The sophisticated equipment will be pivotal in training students, including those joining the joint UCT/UWC Masters in Structural Biology, due to be launched next year, following a major Carnegie Corporation grant secured earlier by the Development Office. (Stellenbosch University's NMR laboratory will act as a service provider and the Masters students will have access to 20% of the time on their machine. Their NMR spectrometer is currently being upgraded, using funds from the Carnegie grant to make it the first spectrometer in Africa capable of determining protein structures.)

Though techniques for gathering information on life-governing molecules have been around for some time, developments by the trio of Nobel laureates have allowed scientists to produce three-dimensional images of macromolecules, like proteins. This enables them to see the proteins and understand how they function in cells, providing a clearer picture of the chemical processes.

The developments have catapulted molecular biology into the â€œbig scienceâ€ of the new millennium, with a commensurate impact on the development of new drugs for cancer and malaria, and new understandings of diseases like Alzheimer's.

Working independently, Fenn and Tanaka were honoured for their improvements in the technique of mass spectrometry. Broadly, this method allows chemists to identify proteins by measuring how quickly they are accelerated in an electric field. The quickest movers are the lightest molecules with the highest charge. Fenn took this technology even further, developing a technique called electrospray ionisation (ERI). Simply put, he sprayed samples using a strong electrical field to produce small, charged, freely hovering ions that could be tracked.

Tanaka used a soft laser desorption technique; molecules take up some of the laser pulse's energy and are released as free ions. WÃ¼thrich refined nuclear magnetic resonance (NMR) (similar to medical magnetic resonance techniques) techniques to map the structure of proteins. Some of the molecular structures microbiologists have been able to identify using NMR are prions, described as the misfolded proteins that destroy brain tissue in mad cow disease and similar disorders.

Using NMR, scientists can interpret the peaks in an NMR spectrum to generate a picture of a molecule. However, this was likened to tracking the peaks of grass blades on a lawn. Which peak belonged to which atom? WÃ¼thrich invented a systematic method of pairing each NMR signal with the right hydrogen (proton) in the macromolecule. This method, dubbed sequential assignment, is the cornerstone of all current NMR structural investigations.

Brandt has studied macromolecules since he first joined UCT in 1965, after obtaining his PhD in biochemistry. â€œMolecular biology is fascinating,â€ he reflected. â€œAnd although the behaviour of macromolecules (protein and DNA) are governed by normal chemical principles, their capacity for molecular recognition generates most of the characteristics of the living state.â€

The equipment used for this â€œbig scienceâ€ doesn't come cheap. But Brandt has dealt with this by putting the machines to work for the University. The molecular cell biology service facility provides a fee-generating service in the field of proteomics, DNA synthesis and gene sequencing for other laboratories.

For example, gene fragments produced by the DNA synthesiser are sold around the country. Last year, this facility generated R1-million, and the money was put to work maintaining the equipment and training students. â€œThis is how many laboratories operate in Europe and it is certainly the way to go in South Africa,â€ he observed.

â€œThe MADLI and the ESI are amazing tools that have allowed researchers to make huge strides in proteomics and genomics in the recent past,â€ he added. â€œWe now know a lot about the DNA blueprint, but the challenge now is to make sense of how the proteins fit and act together in a cell.â€

Though proteomics is a new field of research, it is set to revolutionise the development of drug therapies in the future. â€œThis is where the instruments are so important; without the technology our students can't study these macromolecules, which hold the keys to so many doors,â€ Brandt concluded.

(Postgraduate students who are interested in applying for the Structural Biology Masters programme should contact Professor Trevor Sewell, email sewell@uctvms.uct.ac.za. For information on the services offered in the article, contact Prof Brandt, email brandt@science.uct.ac.za.)