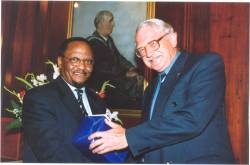 Moving on: Prof Wieland Gevers (right) receives his retirement gift from Vice-Chancellor Prof Njabulo Ndebele. Gevers will, however, not be leaving UCT but is moving on to become Interim Director of UCT's new Institute for Infectious Diseases and Molecular Medicine (IIDMM).


DISTINGUISHED is a word that rests easily alongside a description of Professor Wieland Gevers' 25-year career at UCT. The Senior Deputy Vice-Chancellor retires at the end of this year, but will take up a post as Interim Director of the new Institute of Infectious Disease and Molecular Medicine (IIDMM), in 2003.

One is struck by a CV detailing a legion of achievements of the highest order: an MBChB degree from UCT with first-class honours; Rhodes Scholar at Oxford, where he obtained a DPhil under Nobel laureate Sir Hans Krebs; postdoctoral study under Nobel laureate Dr Fritz Lipmann at the Rockefeller University; Wellcome Gold medallist for Medical Research; Gold Medals from the South African Society for Biochemistry and Molecular Biology and the South African MRC. He received one of UCT's first Distinguished Teachers Awards and became a Life Fellow (1984).

Gevers first came to UCT as a student in 1955. After postgraduate studies at Oxford, he returned briefly to his alma mater in 1970. But it was only in 1978 that he joined the staff, rising to Professor and Head of Medical Biochemistry, and Director (for 15 years) of a large MRC Unit. He was the founding President of the South African Biochemical Society.

â€œDuring my years as an HOD, UCT was a stable ship under the leadership of Dr Stuart Saunders. We had a Council that saw itself mainly as a benevolent supporter of the Vice-Chancellor; Deans played a largely ceremonial role; and we were beginning to admit ever larger numbers of black students, both to academic programmes and to residences,â€ Gevers reflected.

At the time, UCT was also regarded as the country's pre-eminent research institution, led by the faculties of science and medicine. But externally, these were turbulent years as both university leaders and students battled government interference and oppression.

1990 presented a turning point. Gevers was â€œinvited to The Bremnerâ€, to act for the deputy vice chancellors and the vice chancellor, who were going on sabbatical leave in serial fashion. Two years later he was appointed DVC responsible for academic affairs and academic development.

1996 signalled a turning point in UCT's history. With Dr Mamphela Ramphele's appointment as Vice-Chancellor, the University's administration and focus underwent a fundamental shift. â€œMamphela had always been a change agent and had served on the boards of several premier corporations. She came to UCT strongly convinced that its administration was archaic and not sufficiently informed by modern corporate practice. A whirlwind hit UCT,â€ Gevers reflected. â€œStrategic plans were implemented and I was required to act as (virtual) chief operating officer.â€

UCT's 10 faculties were reduced to six; executive deans became responsible for strategic planning within their faculties and the words â€œmanagementâ€ and â€œaccountabilityâ€ became paramount. Gevers was responsible for the Academic Planning Framework, designed to revamp the University's entire academic system.

â€œIn corporate fashion, and with support of UCT's Council, Mamphela outsourced many functions that were not core business.â€ UCT also recruited large numbers of promising black staff during these years, only to see most of them seconded to higher positions outside the university. â€œThe student transformation process began to change, too, with the emergence of the black middle class reflected among our students.â€

On the national side, HE policy was also changing drastically. The comprehensive qualifications authority, SAQA, was established against the University's advice. In 1996, Gevers was chosen to represent the university sector on SAQA. â€œI spent a great deal of time battling for good educational policy for the university sector, as the NQF was implemented as a mega-system for all education and training in the country.

The turbulent years, as he terms them, did leave their mark, Gevers noted. â€œThe difficulty of being the person most directly at the interface between the old, settled university and the new, led to my having to take a lot of hard knocks and (often) of having to be the 'bad cop',â€ he observed.

â€œThe most disappointing thing that happened during that period (and still applies) is that the APF, having been distorted from its original formulation, was not successfully implemented or even accepted in certain parts of the University. These difficulties even led to a call for a formal apology on my part at a meeting of the Humanities Faculty. This must rank as the low point of my career at UCT. What made up for this was the wonderful working relationship I have enjoyed with many of UCT's superb 'backroom' people and a host of very special academics.â€

Since Professor Njabulo Ndebele took the reins as VC, Gevers has helped to stabilise the â€œnew UCTâ€ under the widened and more collegial Senior Leadership Group, with a new Council seeking greater accountability and an enhanced institutional steerage role. Perhaps still a â€œbad copâ€ to some, Gevers said he had enjoyed the mellowing of the overall institutional environment, â€œalthough there remains a strong existential struggle ahead of usâ€.

He believes that UCT cannot avoid addressing the challenges of its operating environment. â€œThere still exists a tension between the 'old university', rich in the scholarship I term 'cottage science' (where individual researchers do what they want to do), and the modern world,â€ he noted.

â€œYou now have 'big science' and 'strategic science'. Research has become more industrial, something Mamphela recognised, but which many areas of the University didn't or wouldn't. Other institutions have, however, grasped the nettle and are gaining on us in leaps and bounds. Our new Institute is an attempt to strategise research, consolidate resources and get people to work together on diseases like HIV-AIDS, malaria and TB, things that have clear, national relevance. We need to be more strategic and proactive in our approach, while retaining our present productive enterprises.â€

There are also tensions between massive teaching demands and research output (especially in the light of the recently introduced quality assurance system). The transformation agenda is also a critically important challenge. There is heavy pressure on UCTs' world-famous Health Sciences Faculty, given the budget cuts by the health authorities. Even UCT's world-renowned mountainside Campus presents challenges in terms of access, safety and full utilisation.

But, in a sense, Gevers' career has come full circle: back to research. In post-retirement he will take on the responsibility of getting the IIDMM up and running. â€œIt needs to have all the logistical knots cut through so that we can work as a strategic research enterprise addressing the big health problems of this country, drawing big money and top scientists.â€ In the last-mentioned context they have a distinguished role model in Gevers.