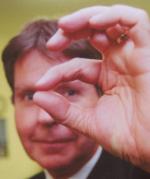 A sure eye and stead hand is what's required: Prof Paul Bowen will represent South Africa at the Seventh World Benchrest Rifle Shooting Championships in Sweden next year.

PROFESSOR Paul Bowen, Head of the Department of Construction Economics and Management, has been selected as one of the eight-member squad to represent South Africa at the Seventh World Benchrest Rifle Shooting Championships in Sweden next year.

Benchrest shooting, says Bowen, is arguably the most accurate form of rifle shooting around, and as such requires a daunting amount of preparation. â€œIt really is a mixture of shooting and precision engineering,â€ he adds.

The aim of the sport is to get as small a grouping as possible with the five shots allowed, rather than, as with most other shooting, to hit the bull's-eye. â€œThe ultimate aim is to put five shots through one hole,â€ he explains.

Bowen first represented the Proteas at last year's championship in New Zealand, where they were soundly beaten by the Americans. He, however, remains excited about donning the green-and-gold again in Sweden.

â€œYou have no idea how proud you feel when you're standing there in a group and they're hoisting the South African flag and playing the national anthem.â€