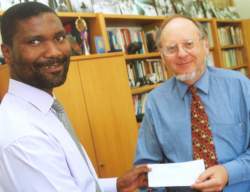 Taking note: Alumnus Mjikisile Vulindlu (left) hands over a cheque of GBÂ£400 to DVC Prof Martin West as a donation towards the studies of a UCT undergraduate student.

JUST SIX short years after graduating from UCT, singer Mjikisile Vulindlu last month returned to his beloved alma mater, this time to hand over a magnanimous cheque of GBÂ£400 that he had earned as a performer in the United Kingdom.

Vulindlu registered for a Masters degree in medical biochemistry at UCT in 1995, but nurtured his lifelong passion for music by joining the popular UCT Choir for Africa, a group for which he would later serve as director.

After graduation, he worked for the City of Cape Town – all the while taking extra opera lessons – before moving on to London.

In England, he kept up his musical interests by continuing his singing lessons, and doing the occasional performance. He eventually approached his employers, the Central Public Health Laboratory, for permission to present a lunchtime recital, during which he took a whip-round and collected GBÂ£400. This money Vulindlu recently handed over to Deputy Vice-Chancellor Professor Martin West as a donation towards the studies of a UCT undergraduate student, preferably one from the Eastern Cape – his own home – who is registered in the science, engineering or medical field.

According to West, Vulindlu's benefice could inspire other young alumni to be equally generous. â€œThis is the first occasion that I can remember a relatively new UCT graduate doing something like this, coming back and making such a generous gesture,â€ he said.

Vulindlu believes that graduates need not wait to hit it rich before digging into their pockets. â€œAll of us who made it through can make a contribution, however small,â€ he told Monday Paper.