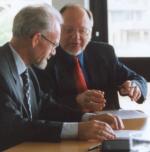 The agreement encompasses three areas: a research and teaching collaboration; an exchange of researchers and senior students; and an exchange of academic materials.

â€œThis will enable UCT researchers and students to visit Oslo and work with colleagues there,â€ said Lesley Shackleton of the International Academic Programmes Office (IAPO). UCT has similar agreements with the University of Bergen in Norway and Uppsala University in Sweden.

The agreement is the culmination of almost a year of negotiation between the two institutions.

â€œUCT sees Norway as one of the key areas in which to develop linkages and this has been strongly supported by the Norwegian government, which is putting funds towards links with South African universities,â€ she continued.

Met by the characteristically blustery South Easter, the various members of the Norwegian delegation met individually with their counterparts at UCT for more specialised discussions in the faculties of law, humanities, health sciences, science and commerce.

(Lara Hoffenberg, Manager International Students, visited Norway recently to meet colleagues from the Universities of Bergen and Oslo and to market UCT to students there.)