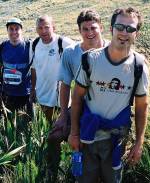 Peak performance: Battling it out among the three peaks are (from left) Brett Paton, Andrew Jarvie, Matthew Roberts and Richard Glass.
EARLY on Sunday, September 29, while the rest of Cape Town was still peacefully snoozing, some 55 intrepid competitors set off on the Three Peaks Challenge, an annual sporting highlight on the calendar of UCT's Graduate School of Business.

The race is notorious for its strenuous and gruelling nature. The route proceeds from the old GSB Campus in Rosebank, firstly to the summit of Devil's Peak, before heading across and on to the highest point on Table Mountain, Maclear's Beacon, before descending down Platteklip Gorge and then across to finish on top of Lion's Head.

In a dramatic contest, the leaders stayed within metres of each other for most of the gruelling challenge. On the home stretch racing up Lion's Head, it was anyone's race. However, successfully completing 13 previous races seemed to take it out of the legs of veteran Peter Major (47), who finally finished a mere two minutes behind eventual race winner, Derek Hume.

Hume posted a â€œmind-bogglingâ€ 2hr47min, not far off the 1991 record set by Paul Donald (2hr38 min). Meanwhile, the rest of the field continued slogging their way over boulders and up rock chimneys (with amazing views all around) towards the finish line.

â€œIt was a long day with final competitors fighting the last few paces up Lion's Head, almost twelve hours after the early morning start. Needless to say the cold beers afterwards back at the Breakwater Prison went down well!â€ remarked the team.