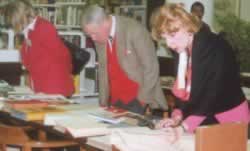 Delegates from the Association Internationale du Bibliophile (International Association of Bibliophiles, or AIB) visited UCT during their recent conference, their first outside Europe, Japan and the US. They visited exhibits in the African Studies Library to view books in the "Europe in Africa/Africa in Europe" theme.

Their visit to South Africa from September 30 to October 5 represented the Association's first conference outside Europe, Japan and the US.

The Vice-Chancellor, Professor Njabulo Ndebele, and Andrew Lamprecht of the Michaelis School of Fine Art, addressed the cosmopolitan group in the Richard Luyt Room.

Thereafter they visited the African Studies Library, which was closed for the morning, to view an exhibition of books around the theme "Europe in Africa/Africa in Europe".

The group was introduced to the Bleek Manuscripts that form an integral part of UCT Libraries' Bleek/Lloyd archive relating to the Khoi and San people of southern Africa. Wilhelm Bleek, son of the German biblical scholar Friedrich Bleek, was a pioneer linguist of South Africa. His Comparative Grammar was the first attempt to compile a unified philological survey of all the languages of the sub-continent.

Lucy Lloyd was Bleek's sister-in-law and a fellow linguist in her own right. During his last years and after his death she continued interviewing the /Xam-speaking â€œinformantsâ€ Bleek had worked with, a group who had been assigned to Bleek's supervision as prisoners.

Lloyd compiled over 12 000 pages of manuscript notes covering the entire world-view of the /Xam. These notebooks, nominated as part of UNESCO's "Memory of the World" register, are now housed in UCT Libraries.