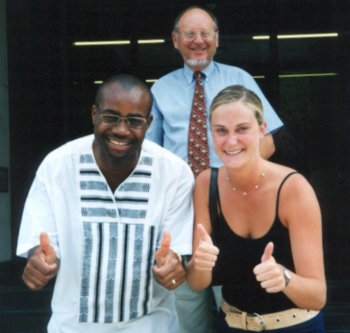 No filthy lucre here: Dr Kelly Chibale (Chemistry) (left), and third year student Christina Melville received cash awards from the University for their efforts to fight crime on campus. On hand to congratulate them was Deputy Vice-Chancellor Professor Martin West (at back).


AND THEY SAY crime doesn't pay. Of course they're right, unless you happen to be a crime fighter. Dr Kelly Chibale from the Department of Chemistry and third year BA (Cultural and Literary Studies) student Christina Mellville have received words of commendation and cash awards from the University for their efforts to fight crime on campus.

Last year nimble-footed Chibale cornered a suspect (who later turned out to be carrying stolen goods) in his laboratory after he had observed him trying to punch in codes to enter the laboratory. Once inside, Chibale locked the door ("I was bigger than he was", he quipped) and called Campus Protection Services who arrested the man.

Speaking at the presentation last week, Deputy Vice-Chancellor Professor Martin West applauded Chibale and Melville for their community spiritedness. "So much of the crime on Campus is petty theft and so much could be avoided if everyone was just more vigilant."