Birds on a wire cause power problem 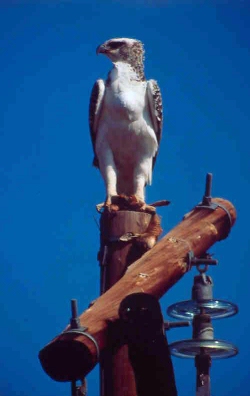 
THE MARTIAL Eagle (Polemaetus bellicosus), one of South Africa's rarest eagle species, is causing problems along Eskom power lines in the Karoo. The eagles and their nests are causing multiple power outages and supply faults on Eskom power lines. But a planned collaboration between UCT and Eskom promises to improve this situation.

By reducing the quality of the electricity power supply, these eagle-induced power outages are proving very costly for Eskom and the South African economy. Every outage incident is investigated by Eskom field teams, and some power lines are in pretty remote areas. UCT and Eskom representatives recently met to forge an alliance, which, once formalised, will help to secure the long-term preservation of the Martial Eagle in the Karoo.

Professor MornÃ© du Plessis (not to be confused with the rugby legend), Director of the FitzPatrick Institute of African Ornithology, and Dr Andrew Jenkins, a researcher at the Institute, met with Fabio Bologna of Eskom's Technology and Investigations division, Chris van Rooyen of the Eskom-Endangered Wildlife Trust Strategic Partnership, and Koos de Goede, Western Cape representative of the EWT's Raptor Conservation Group, to discuss their collaboration to research and conserve the "Electric Eagles" of the Karoo. 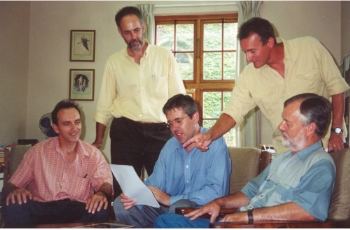 
"The Martial Eagle is threatened in South Africa, with numbers decreasing by as much as 20% in the past 50 years," Jenkins said. "The national population is estimated at less than 600 breeding pairs, most of which are confined to the extensive conservation areas of the Lowveld and the Kalahari."

Although the Martial Eagle is rare in unprotected areas, a significant population still persists on farmland in the central and southern Karoo says Jenkins. "The supply faults are probably caused by long streamers of excrement deposited by the eagles when they perch at roosts or on the edge of active nests, that occasionally connect conducting elements of the pylon structure."

Because the Martial is essentially a tree-nesting species, breeding pairs on the open, tree-less plains of the Karoo are very dependent on Eskom electricity pylons and power poles as sites for nesting, he added.

These Karoo birds, largely accommodated by Eskom, could constitute as much as 20% of the country's Martial Eagle population and at least 50% of the Martials found outside protected areas. They are thus of great conservational importance.

Eskom already has numerous other bird-protection devices in operation on many of its power lines, such as bird flappers that improve the visibility of the power lines, thus reducing collisions and electrocutions.

The main aim of the Electric Eagle project is to develop ways to predict, pre-empt or prevent eagle-based power outages (brief interruptions in the power supply) to reduce Eskom's financial losses and to ensure the continued tenancy of eagle pairs at pylon nests. Some of the elements that will be investigated are pylon designs, especially those that are susceptible to this kind of problem; the bird parameters that contribute to streamer-outages, for example, nest structure or stage in breeding cycle, and physical protection of the conducting elements of those pylons holding nests.

The plan is that Eskom will fund the project, which will be administered by the FitzPatrick Institute and conducted by Jenkins and De Goede.

"The study will also examine the influence of rangeland management practices on the quality of Karoo veld as a habitat for breeding Martial Eagles," Jenkins said. "Eagle densities and breeding success may be depressed on poorly managed farms, where the veld is degraded and eagle prey species are thin on the ground."

He said that a clear demonstration of this relationship could establish the Martial Eagle as an effective indicator of arid rangeland quality and an icon or flagship species to promote better environmental management of Karoo farms.