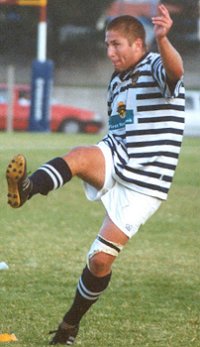 IT WAS a topsy-turvy past few weekends for the FNB UCT rugby side, scoring an easy victory over Helderberg on April 13, but throwing away a convincing lead against Tygerberg the following Saturday in a defeat that will give them much food for thought.

The team easily beat Helderberg by 40–12, running in an impressive six tries to two in the match. Right-wing John Bradshaw scored two touchdowns, and a little hard work on the practice field paid off for Grant Kolesky who converted five of the tries.

It was also a good day for the second and third sides, winning their games against their Helderberg counterparts by 48–7 and 38–7 respectively.

In contrast, the first team would probably like to put their visit to Tygerberg the following weekend behind them as soon as possible. With the victory just about packaged and delivered at half-time and enjoying a 19-point lead, the team somehow managed to lose the match by three points in a 27–30 thriller.

Just about stuck on their line for the first 20 minutes of the match, the students cast off their Tygerberg shackles to turn in a match-winning first-half performance. Three tries – including another two for Bradshaw – saw the side take a comfortable 24–5 lead at half-time.

The lighter Tygerberg side appeared a more resolute outfit in the second-half, slowly but surely overtaking the UCT side – much to the pleasure of the home fans. Tygerberg made extensive use of their backline, running the ball away from the rucks towards their outside backs, and always appeared to have an extra man available to take the decisive pass over the tryline (with little hint of a UCT defence).

With only about ten minutes left in the game, UCT found themselves trailing 24–30, conceding three tries and not able to score any points in the second-half. A late penalty took the score to 27–30, but the final whistle a few moments later put to an end any thoughts of a possible last minute reprieve.

Again, the second and third sides enjoyed more successful outings, the former touching down five times in their 42–0 victory. The third team was not as free scoring, but managed to beat their rivals by 17–10.