Medals and praise for CAS postgrads 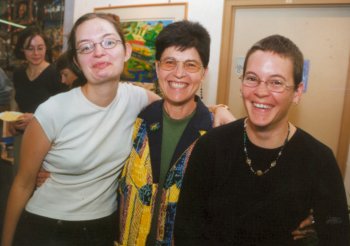 
A NUMBER of students registered with the Centre for African Studies (CAS) were rewarded for their hard work during 2001 when they were awarded class medals and scholarships at a small function at the Centre recently.

Up first, CAS Director, Professor Brenda Cooper, handed a class medal to Jocelyn Newmarch for excelling on the CAS' Images of Africa course last year. Emma Sealy also received a medal for her outstanding work on the Public Archaeology in Africa programme. Medals were also awarded to Anmol Chaddha for Debates in African Studies, Alonzo Emery for Public Culture and Blaire Burman for Race, Culture, Identity in Africa.

In turn, Professor Crain Soudien, Chairperson of the Harry Oppenheimer Institute (HOI), named the winners of two of the 2002 HOI Awards. These went to political science Masters student Lauren Paremoer, who received the Harry Oppenheimer Scholarship, while Thabo Manetsi earned himself the Jack Simons Award.

Dr Aderemi Raji-Oyelade of the English Department at the University of Ibadan in Nigeria was named as the CAS' Visiting Scholar for 2002.